A startup company in The Netherlands got the opportunity  to promote their product in a news programme of the national public broadcaster: a nano foil which should protect mobile phone users from harmful radiation. The company also performed tests on ants, which show that this radiation is actually dangerous. These tests are a follow up on research done by a Belgian researcher, whose data seems ‘too good to be true’.

On January 3rd 2013 the viewers of news programme NOS op 3 were shown an item about a new tech company in the south of The Netherlands. This company, Brainport Biotech Solutions, is developing a nano foil which applied to a mobile phone, should protect its user from harmful radiation. On the website of the company this is backed up by a lot of pseudo scientific crap: the material is able to change “chaotic radiation into a pattern of coherent (harmonic) waves of selected frequencies”.

The main reason I could think of why this business man was taken seriously by journalists is that he presented some scientific research which had shown desastrous effects of GSM radiation on ants. This research was done by Marie-Claire Cammaerts, a senior researcher at the Université libre de Bruxelles. I had already read something about it back in July 2012, but this was a good reason to have a closer look. What I found in the article doesn’t look good, and that’s not because of the poor ants’ health.

Conditioning of ants with and without GSM radiation

The article of interest is Cammaerts, M.-C., De Doncker, P., Patris, X, et al., (2012). GSM 900 MHz radiation inhibits ants’ association between food sites and encountered cues. Electromagn. Biol. Med. 31: 151-165. Previous research by Cammaerts had shown that it is possible to condition ants to respond to visual and olfactory cues. For some reason she thought it interesting to find out what effect GSM radiation could have on this type of training of ants.
The experiment was done with six ant colonies (Myrmica sabuleti Meinert 1861) who were kept in plastic trays with glass tubes as their nest. During training the ants were presented food in a green colored cube (visual cue) or a surrounded by small pieces of fennel (olfactory cue). The idea is that the ants learn to associate the color or scent with places where food can be found. 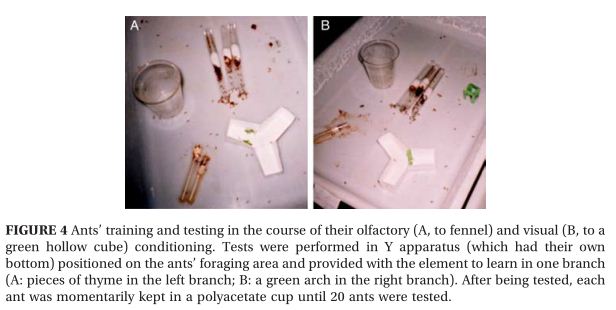 To test the learning progress of the ants, tests were done at regular intervals. A single test consists of putting an ant in one leg of an Y shaped apparatus (see picture above), and recording whether the ant chooses the marked leg of the ‘Y’ (marked either by visual or olfactory cue) or the unmarked leg. The whole idea behind this setup is that before conditioning the ants don’t have a preference for one of the two options. Conditioning (without radiation sources) makes the ants choose the marked leg more often as was shown by Cammaerts in the previous study.

The remarkable  results of this study suggest that conditioning doesn’t occur under GSM radiation. The main results are given in two tables. Here below I gave the one on training with the visual cue (a green arch in one arm of the Y shaped apparatus). In reality the training with the two cues was done ‘intertwined’. The effect seems very obvious: under GSM radiation no conditioning effect and when GSM radiation is not present the conditioning happens as in the previous study.
There was some criticism on the experiment, when it came in the news in Belgium (July 2012). Associate professor Luc Verschaeve of the Belgium Scientific Institute for Public Health had the setup of the experiment checked by a technician, who suggested that noise or wind from the fan in the apparatus which emulated the GSM radiation might be the cause of the disturbed conditioning. But I think there is something more seriously wrong with this experiment.

Each data cell in these table is the result of 20 consecutive tests on ants randomly picked from the same colony at a certain moment. The figures are the number of ants from those 20 who chose the leg of the Y-shape  with the cue (visual in this case). Now my main problem with these results: variance between observation moments and between colonies is far below anything you might expect.

Let me explain that as follows: the choice of an ant before conditioning or under cirumstances in which conditioning fails, could be seen as a coin flip. Let’s say ‘heads’ is the choice for the marked leg. Then the data cells can be seen as the number of heads in 20 consecutive coin flips. There were measures taken to be sure that ants could not ‘sense’ the trajectory chosen by the ants tested before, so we can consider individual tests to be independent.

If we look at the first block of 36 cells of Table 2 (after ‘Controls’) we see 36 results, with smallest result 8 and highest result 11. The same holds for Table 1. This is extremely unlikely. If the analogy of coin flips holds, chances of not finding any number smaller than 8 or higher than 11 in these 72 tests are about 7.7 x 10-16.
Either the ants are capable of performing statiscal miracles under influence of GSM radiation or these numbers have been influenced by observer bias, and may very well have been made up completely. Other explanations are very hard to think of (I tried however, see below).

The way the data was recorded leaves too much room for interpretation (or manipulation). Not the leg of the Y in which the ant eventually ended up in, was recorded as his choice, but the first turning at the crossing, towards the cue or not. So if an ant was going in direction of the green arch (testing with the visual cue) it would count as a ‘hit’, although he might turn around immediately after that and go for the other, unmarked leg. As testing was not done blindly for the observers and from one colony all ants were tested one after another, it is easy to steer observations to the ‘desired’ outcome at that moment in the experiment.
What things make worse is that the article states the following about the data collection:

Note that the observations were made by the first author for avoiding, to the co-authors, healthy [sic] problems caused by the exposure.

That Cammaerts is the only one who collected the data is not comforting at all. The reason given for the fact that she did it all by herself is laughable: what health danger is meant? The radiation was supposed to be at similar (or lower) levels as those you would encounter walking outside the laboratory walls.

I blogged about this on Kloptdatwel a week after NOS ‘retracted’ the item (they acknowledged that it had been sloppy journalism), but I decided not to leave it at that. I wrote an e-mail to the editor of Electromagnetic Biology and Medicine, research professor Henry Lai, in which I explained my concerns. (After a reminder a week later) he replied that he ‘read the paper carefully and  thinks it is a very well carried out research’. He clearly had not given any thoughts to my objections on the statistics. I suggested he should consult a statistician, if he was not able to grasp the details himself. I didn’t hear from him again.
Now let’s have a look at something else in the article text. Although it doesn’t play a significant role in the article, it is rather peculiar to find the following lines in the part where the authors explain how they simulated real life GSM radiation conditions:

Prof. Lai says he read this article carefully, but if this was not picked up by him as an editor nor by the reviewers, I have to doubt the way this journal checks articles. This is worrying, because Prof. Lai is also responsible for the Research Summaries of the BioInitiative 2012 (the article of Cammaerts et al. is also mentioned in these summaries). Several respectable organisations already have critized the findings of BioInitiatieve in the past, and if more articles like these continu to be part of those summaries it makes them even less reliable as a source of information on the health effects of electromagnetic fields.

In the video interview below (in French), Cammaerts explains that her article was refuted by two European journals before it was accepted by Electromagnetic Biology and Medicine. She insinuates that happened because her findings are not in line with what other scientists and policy makers want us to believe, that GSM radiation is of no risk to us.

The main message of the article doesn’t seem to be the loss of the ability of learning under GSM radiation, however. A part of the article describes the terrible state which the six colonies seemed to be in after the experiment. The ants ‘exhibited locomotors ataxia’, ‘level of food intake decreased during exposure’, ‘larvae didn’t develop as normal’ and ‘many adults (and a queen) were found dead’ at the end of the experiment. Some relating quotes:

The effects of GSM 900Mhz radiation are obvious.

Conclusion 7: Moreover, six physiological impacts of GSM 900MHz radiation were observed
(but not quantified because they were unexpected). These impacts concerned
ant movement, feeding and brood development.

If this were true, it would be a worrying result. Instead of doing a replication in which you would just look at how ant colonies would do under GSM radiation (without all the trouble of conditioning and testing) with proper controls, Cammaerts is doing more complicated experiments in which she is measuring length, speed and ‘curviness’ of ants’ trajecories (link: pdf). I wonder why.