After release of the latest YouTube video concerning the ‘clinical trial’ in Luuka, Uganda, which allegedly proves that MMS (Miracle Mineral Supplement/Solution) was effective against malaria, it has become clear that the Ugandan Red Cross Society (URCS) was indeed involved and that it was organized (as a private initiative) by Belgian Klaas Proesmans, CEO of the Water Reference Center (WRC). See my earlier blogs, if this is the first blog on this matter you stumbled upon: Fake and Unethical Trial: Video Claims Miracle Mineral Solution Cures Malaria and What did the Ugandan Red Cross Society know about “the ‘miracle’ solution to defeat malaria” Video?
According to Jim Humble, inventor of MMS, this new video was produced by a Ugandan film crew, commissioned by Proesmans. It was uploaded to YouTube in January, but not made publicly available. Apparently the URCS and Proesmans were still debating what to do with the seemingly incredible results of the ‘trial’. The video was ‘leaked’ to Humble c.s. and is now being spread via YouTube and Facebook. They added a foreword by Humble and an epilogue by Leo Koehof (who produced the first video and was present in Luuka during the events in December 2012).

[Update 21 May 2019
YouTube has deleted many channels used by MMS promoters recently (see this article in Business Insider for some background). This video can still be found on YouTube if you know where to look for it.]

Although the statements of the URCS and the WRC (archived copy), in which they dissociate themselves from the first video, seem empty now, we still don’t have enough information to get a good picture of what happened. Is there enough proof now to accept MMS as a cure for malaria or to start more research immediately to follow up on this remarkable results? I don’t think so and I will tell you why.

In my earlier blog I suggested that they might have fooled us by making us believe that they did a proper check on the positive quick tests. Those tests quite often give false positive results in malaria endemic areas and if they only did a blood slide the next day, that could just be seen as confirmation of such a false positive result. However, now it is quite clear that the URCS was involved and is trying to keep things down, this scenario is not so likely anymore (otherwise they could just point this out themselves). But I think a closer look on the protocols for taking blood slides for malaria testing could provide some interesting ideas of what might have been the reason for the remarkable results. 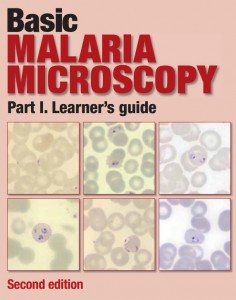 How to take blood slides and use them for malaria diagnosis is written down in Basic Malaria Microscopy (pdf), published by the World Health Organisation (WHO). Like we see in the video, you start by taking a drop of blood from a finger prick. This drop is smeared on a slide. For checking for malaria parasites you’ll make a ‘thick film’, which consists of many layers of red and white blood cells. This smear is then stained, which causes the haemoglobin in the red cells to dissolve, so that large amounts of blood can be examined quickly and easily.
Now the microscopist will keep track of two numbers, the white bloodcells (leukocytes) and parasites he or she sees in each microscopic field. A satisfactory thick film will have 15-20 white bloodcells in each field. In each field the two numbers are counted and when finished, the slide is moved a bit so that you’ll see a completely new field. This continues until 200 leukocytes are counted (you have to finish counting the field in which you reach this number). The estimate of the number of parasites in the blood is now given by the following formula:

So it’s the number of parasites per leukocyte multiplied by a constant, which is the average number of leukocytes in blood per microlitre. This ‘parasites per microlitre’-number is called parasitaemia. If you find for instance 539 parasites on 214 white blood cells, the parasitaemia is 539/214 x 8.000 = 20,150 parasites per microlitre, which makes a decent infection, but not a severe one. In areas which have a high malaria burden, severe malaria cases start at a parasitaemia of 250,000.
With very low parasitaemias things are a bit more complicated. If you reach the 200 leukocytes during the microscopic scan, but found less than 100 parasites so far, you should continu screening fields until you have counted 500 leukocytes. This of course takes a lot more time. Pronouncing a blood slide negative for malaria parasites even takes more time, because at least 100 fields should be examined and found free of parasites. This will take approximately 10 minutes. And here my doubt on the results of the ‘trial’ in Luuka starts.
They tell us all 154 participants who had malaria before ‘treatment’ were tested negative for malaria the next day (11 were not ‘cured’ immediately). Also we can hear Proesmans tell, that on day 1 they only found 5 malaria cases. This means that the lab has pronounced at least 149 slides malaria negative on days 3-5. This would, if done properly, take at least 25 hours continuous looking through a microscope.  As it seems that there was only one microscope present, this would mean they used it more than 8 hours a day. This doesn’t look feasible (and remember they also had to to confirm the positive quick tests and do blood slides of patients, not participating in this test).

Maybe they only checked about ten microscopic fields, that would be a normal number to reach the 200 leukocytes you have to count for getting an indication of the severity of infection for clinical purposes. But that’s not enough to pronounce someone free of malaria. We also have to consider that in Uganda 42% of the population has parasites in the blood without being ill. Their parasitaemia is too low to cause symptoms, and their partially immunity will keep the infection in bounds. So for clinical purposes such a quick scan of a couple of microscopic fields will probably give enough information.

On the other hand, those quick test are quite sensitive. They don’t react to parasites themselves, but to antigens the body creates against these parasites (but they might stay in the blood up to a couple of weeks after someone actually was infected). Translated to parasitaemia they can detect infections of as low as 50 parasites per microlitre, which would mean about 0.1 parasites in a microscopic field. To detect an infection with such a low parasitaemia, you’ll have to check quite some fields. If you know that someone already tested positive on a quick test, you might be inclined to check enough fields to confirm this and in doing so, check far more fields than you would do the next day when you pronounce the person free of malaria, when no such quick test is done.

If we don’t know if both microscopic tests were executed using the exact same procedures, I think it’s not possible to draw any conclusions from the results. To perform such a microscopic research properly, you’ll have to describe upfront very precisely how you will judge blood slides and it’s preferably done by microscopists who are unaware of the persons malaria status obtained from the quick test. It doesn’t look like they took those precautionary measures here and there is ample room for confirmation bias. It all differs quite a bit from the instructions prescribed by the WHO for assessing and monitoring of antimalarial drug efficacy. As a scientific test, it is just a mess and it’s impossible to draw any conclusions from the results.

To get to the bottom of this, we need the URCS to explain in detail what happened in the lab and release of the data. By almost denying that the ‘trial’ took place, they are just feeding all kind of conspiracy theories. They didn’t reply to my e-mail in which I expressed my worries that this would happen. On a German website however, there is a response by Sarah Musisi, Director Health and Care Uganda Red Cross Society (who earlier also responded to questions of a Spanish skeptical site):

If what I have written has turned out to portray a bad attitude, I must apologize for that. It was not my intention to do that. All I can say is that the whole video is very unfortunate and worse still that my name is mentioned in it. I still emphasize that URCS does not believe in the treatment of malaria as claimed in that video and we continue to encourage our communities to seek care and treatment from qualified health providers. The issue of the video is being handled by the URCS management and we hope it will removed from the net soon to save people from the lies.
I apologize once again
Sarah Musisi

There is no scientific evidence that MMS can improve the health of people suffering from serious illnesses like HIV/AIDS, cancer, malaria or whatever disease Humble and his followers claim MMS is good for. On the contrary, that MMS is good for anything at all, when swallowed is extremely implausible  A good resource on MMS which shows the lack of scientific backup for the claims of Humble, is: MMS Debunked.

20 thoughts to “Update on MMS malaria ‘trial’ in Uganda”