You might think that , in these modern days, claims of cheap and simply way to deliver unlimited energy would not be taken seriously. Inventors who come up with these so-called perpetuum mobiles are something from a distance past. Or are they? Recently I became interested in the developing story of such a Free Energy machine, which is supposed to run indefinitely on the power of magnets alone. This magnet motor is invented by a Turkish former policeman named Muammer Yildiz. In 2009 and 2010 he presented his motor at the Eindhoven and Delft Universities of Technology. You can find videos of these demonstrations on YouTube.

It’s quite interesting to think about whether scientists should take these kind of claims seriously, as we are well aware of the physical (im)possibilities which seem to be set upon us by the Laws of Thermodynamics. Isn’t far more likely that such a machine is a (clever) hoax than a scientific breakthrough? The idea that this is indeed just another hoax is strengthened by the secrecy the inventors generally hold up protecting their invention; afraid, as they claim to be, that someone else runs away with their idea. This secrecy does not entice scientists to give their opinion on the machine, however some of them take Yildiz’s apparatus very seriously and even seem to promote it as real.

An important question to answer if you believe it to be a hoax, is: what is the perpetrator trying to accomplish? Yildiz for instance has been working on his magnet motor for more than a decade and he doesn’t seem to be in it to quickly make a lot of money and disappear (as others have tried before him). On the other hand he must have investors who support him, also financially, and what does he tell them?

I think a story of more than a century ago might shed some light of what might be going on. In 1872 John Worrell Keely announced that he had discovered a new principle for power production. He claimed to be able to ‘tap etheric energy’, a ‘latent force’ of nature and ‘the vibratory energy of the ether’ as he described it himself. Keely build a generator in his house, which he demonstrated regularly, a complicated ‘hydro-pneumatic pulsating vacuo-engine’. During these demonstrations Keely blew into a nozzle for half a minute and then poured five gallons of water into the same nozzle. After some fine adjustments the pressure gage indicated pressures of 10,000 pounds per square inch inside the device. This, said Keely, was evidence that the water had been disintegrated and a mysterious vapor had been liberated in the generator, capable of powering machinery. 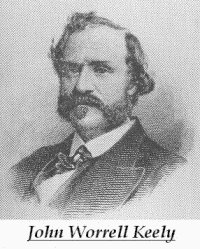 Keely managed to attract some investors for his company which was supposed to bring this machine to the market. To the frustration of his investors this never happened. Luckily Keely managed to find a wealthy widow who was willing to support him for rest of his live, although in the end she cut his allowance as she was also losing faith in his inventions as marketable products.
When Keely died in 1898 his secret came to light: his etheric generator on the second floor of his house was in fact powered by an engine in the basement. False ceilings and floors on the first floor were found to hide mechanical belts and linkages to the silent water motor. A system of pneumatic switches under the floor boards could be used to turn the machinery on and off. Keely had managed to acquire a good income throughout his career keeping up the appearance of genuine inventor.

I wonder whether we encounter a similar scenario in the case of the Yildiz motor. So far things are running along the same lines. In January this year a 30 day test of his engine was planned at a European university, which was willing to test his device. The test was cancelled just a few days before it would start., because the unnamed university was setting more extraordinary conditions, according to Yildiz. As an alternative he would be demonstrating his device at an Expo in Geneva in April. He did. The motor ran for four and a half hours and then … there were problems. The planned continuous run of five days had to be stopped and was replaced by short demonstrations of switching the motor on, letting it run for a couple of minutes and shutting it down again. Not very convincing to a sceptical mind, but surprisingly enough some of the early believers think it clearly shows Yildiz is on the right track. The Yildiz story is not over yet.

This article was written for the summer 2013 edition of Thesis, the digital magazine of LEO, an organization for PhD candidates at Leiden University.

More on Keely on The Keely Motor Company (with lots of pictures). The Yildiz website can be found here: http://www.bsmhturk.com/. I’ve written two articles on kloptdatwel.nl (in Dutch) about the Yildiz motor: Ontwikkelingen rond magneetmotor van Yildiz and Over de Yildiz motor – interview met Jorge Duarte