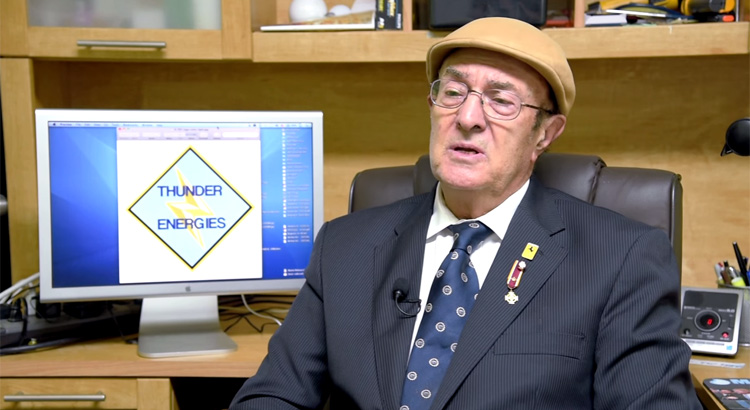 Recently the following YouTube video of Thunder Energies Corporation, a company of fringe scientist Ruggero Santilli, has gotten quite some attention on the web, mainly on sites on the paranormal.

So what does Santilli claim this time? That antimatter produces antimatter-light and that it can be focussed using concave lenses. This in contrast to ‘ordinary’ light which you can focus with convex lenses. You can also read it in detail at the website of the company:

Matter-Antimatter annihilation also requires that antimatter-light must have energy opposite that of matter-light, as predicted by P. A. M. Dirac in 1932 and verified by R. M. Santilli in his decades of research on antimatter (see the the theoretical confirmation and the experimental confirmation).

This claim by Santilli might be the easiest to debunk of all the extraordinary claims he has made (like the existence of magnecules and his alternative explanation for why the sun colors red when it sets). The whole concept of antimatter-light is bullshit, because the anti-particle of a photon is simply a photon. So if you want to speak of antimatter-light it’s no different than ‘normal’ light. ‘Antimatter-light’ will therefore not focus with a concave lens. I will not even bother trying to give explanations for the grainy images he took with his Santilli-‘out-of-focus’-telescope which he claims show Invisible Terrestrial Entities …

[NB The title of this post has been changed on 7 September 2018 as part of a settlement agreement.]

Santilli writes that he has an article on this discovery of Invisible Terrestrial Entities in press with the American Journal of Modern Physics. That’s just one of those fake journals, which will probably print anything if you are willing to pay their fees (it’s on Beall’s list of predatory scholarly open-access publishers [mirror] – 24/5/2016: see update below). It’s not the first article on his silly Santilli telescope, some of affiliates wrote on it before in the same journal. And in 2014 Santilli wrote an article, together with some friends: “Preliminary confirmations of antimatter detection via Santilli’s telescope with concave lenses”. 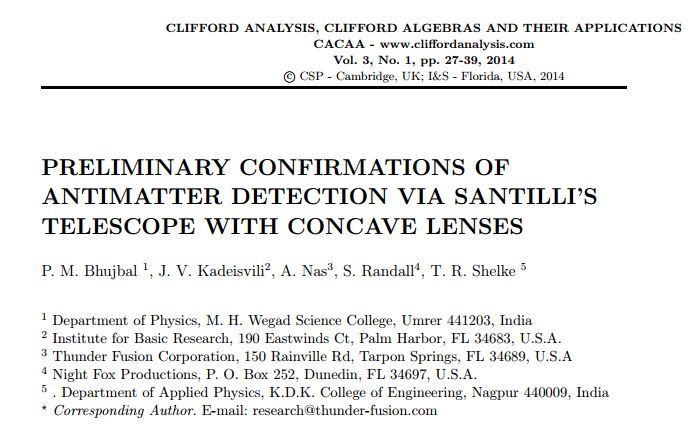 ‘But wait, there is no Santilli mentioned as author!’, you might think. That’s right, but in another article on my website (from May 2013) you’ll find my proof that ‘J.V. Kadeisvili’ is just an alias for Ruggero Santilli himself: ‘Finding JV Kadeisvili – or Mailing with Ruggero M Santilli‘. The website of this journal doesn’t show any useful info at the moment, but from an announcement (2011) we pick up that the Editor in Chief is (or was) Svetlin Georgiev, who has written a five volume book series on the iso-mathematics of Santilli. I wonder how much Santilli paid for that service.

Is Santilli just a mad professor? Or is he a cunning scam artist trying to sell his ‘Santilli-ofocus-scopes’ (or even better: stock in his businesses) to people who fall easily for sciency sounding nonsense? Maybe both …

Update 25 August 25 2016: Santilli is not happy at all with this post, see ‘More Santilli Shenanigans‘.

Update 2 November 2016: next chapter in this story, ‘Sued by Santilli‘.

Update 13 September 2018: Settlement in Santilli vs. Van Erp and Israel

Update 17 May 2020: he Santillis have sold Thunder Energies Corporation to a company (Mina Mar Group) that was probably just interested in the financial shell (the shares are still traded under the stock symbol TNRG). The new company (Nacaeli) operates a fleet of personal yachts jets, exotic cars, and resort type villas in highly desirable vacation hot spots. It looks like Santilli finally decided to retire.