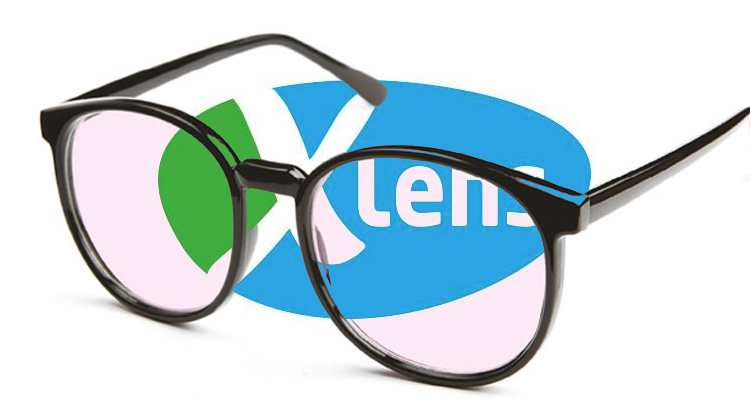 Dutch company Xlens sells glasses with colored filters for reading problems. On its website and advertisements the company  strongly suggests that these glasses help people overcome dyslexia. There is however very little scientific evidence that these glasses are effective for anything else than taking money from parents who desperately want to help their children with reading problems.

Xlens is not new, the company has been around since at least 2005. In that year Skepter, the magazine of the Dutch Skeptics Foundation, published a very critical article on the expensive colored glasses. In this article the author investigated the claims for the use of colored filters with dyslexia and found that there is no solid proof that they might help. There seems to be scientific consensus that dyslexia is a cognitive disorder, probably with a neurological basis, and that it has nothing to do with problems in vision. There are however some researchers who think differently, like professor John F. Stein. He came up with the colored filters and claims some succes with those. Big difference with the product of Xlens is that his glasses are very cheap, just a few euros.

In 2014 Xlens filed bankruptcy and got a new owner, who vamped up the marketing considerably with TV commercials and full page newspaper ads. The critical Skepter-article of 2005 still came up on top in Google searches however, which obviously annoyed Xlens. At the end of 2014 they complained about it to Skepsis and stated that the article was now obsolete because of new evidence and contained several falsehoods. I was asked to have a look at this new evidence and this led to a new article in Skepter (2015).

I asked Xlens to send me their best evidence, but of course I had already taken a look at their website under ‘scientific evidence’ which indeed showed some recent articles. But a quick inspection learned that these either had very little connection to the colored filters of Xlens or with reading problems. And some could simply not be seen as something scientific. Xlens for instance states: “Bradford University writes that reading problems due to dyslexia can be partially or completely solved with filters.” And for that claim a link to the webpage of the University Eye Clinic is given which delivers services to students, but this has nothing to do with real research.

In response to my questions Xlens set their money on the research of neuropsychologist dr. Edwin Verstraeten, who had done EEG measurements on one subject. According to Verstraeten the Xlens glasses: “prevent an ineffective increase of slow theta waves, which does occur without Xlens” and “the brains are activated in a targeted and effective way through an increase of beta2 and gamma power”. Whatever this means exactly, the relevance to the claims of Xlens seems far away, also because it is based on just one person. Verstraeten let me know he was quite surprised that Xlens put his exploratory research forward as the best proof the company has. Later, in a reaction to the Association against Quackery, Verstraeten said that he has requested Xlens several times to remove the link to his research, but this doesn’t seem to have any effect.

The company also mentions research from the University of Utrecht, of which Xlens stated that it supports the working of their filters. When I looked at these Master student theses, which were initiated by Xlens, I noticed that Xlens had distorted the results of these considerably. The Faculty of Social Sciences was not pleased, when I pointed this out, and they have forced Xlens to change the way in which the company refers to these theses.

In my opinion any observed improvement in reading from the research Xlens has put forward can be explained by placebo effects or normal progress. At the moment there is no good reason to think Xlens glasses contribute in a significant way. It would also have surprised me if Xlens had any good evidence to show, because The American Academy of Pediatrics couldn’t identify such evidence in their most recent review on the subject. From the abstract of Learning Disabilities, Dyslexia, and Vision, Sheryl M. Handler et al., Pediatrics Vol. 127 no. 3, (2011):

It’s up to the promoters of these colored filters to provide evidence, but it doesn’t seem like they are really interested in doing good research. An offer by professor Aryan van der Leij (who wrote an extensive article on dyslexia in same issue of Skepter my article appeared in) to do a good experiment for just 25.000 euros was not picked up by Xlens. Maybe the company did not like the condition that the results would be published no matter the outcome.

The Xlens glasses are really expensive (555 euros just for the filters) and although they seemingly have a fair return and refund policy, to me this still looks like taking an advantage of parents who of course want the best for their children. The company can just take into account the refunds they have to pay back in the original price, so what’s the risk for them? It’s a bit like telling parents who are expecting a baby that you can tell them the sex of their new child for 25 euros with a refund policy of giving the money back, if it turned out that you were wrong. Probably some people would fall for that too.

The Reclame Code Commissie (a regulatory organisation for advertising, similar to the ASA) has warned Xlens several times since my article was published for making claims which violate the rules for advertising. Nowadays the company states that a customer satisfaction survey disproves the criticism of Skepsis. Also Xlens have made claims for ADD and ADHD, for which they of course have no evidence either. Probably they will get another warning for these claims, but I doubt it will stop them from making bold unsubstantiated claims, too much money can be made in this market. Xlens is already expanding internationally with a couple of ‘Xlens consultants’ in Germany and Belgium.