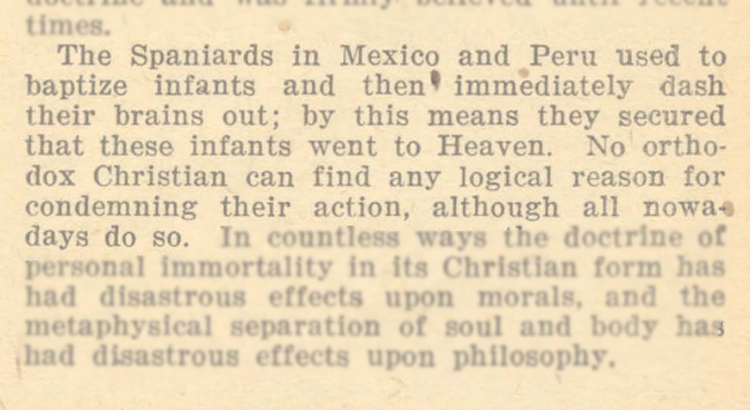 Famous thinker Bertrand Russell (1872-1970) wrote on numerous subjects, ranging from mathematics to religion. Personally I know a bit about his mathematical work, especially on logic and the philosophy of mathematics, but rather little of his writings on religion. According to his biography on Wikipedia: “For most of his adult life, Russell maintained that religion is little more than superstition and, despite any positive effects that religion might have, it is largely harmful to people.” It is therefore not surprising that you can find quotes from Russell’s texts in the writings of many atheist thinkers.

I stumbled upon such a quote, which raised my eyebrows. I found out it is brought up in several books by atheist writers who argue against religious believes, for instance in Sam Harris’ The End of Faith: Religion, Terror, and the Future of Reason. In his essay Has Religion Made Useful Contributions to Civilization? (1929) Russell writes (almost at the end of the paragraph ‘The Soul and Immortality’):

The Spaniards in Mexico and Peru used to baptize Indian infants and then immediately dash their brains out: by this means they secured that these infants went to Heaven. No orthodox Christian can find any logical reason for condemning their action, although all nowadays do so.

Full text can be found here, or here in a pdf of the original publication as Little Blue Book No. 1463. This essay can also be found in the book Why I Am Not a Christian and Other Essays on Religion and Related Subjects.

Russell uses this example to illustrate that the belief in an immortal soul and the necessity of baptism for reaching a preferable eternal existence after death can lead to weird situations. Just before this, he writes “For example, if you died immediately after a priest had sprinkled water upon you while pronouncing certain words, you inherited eternal bliss; whereas, if after a long and virtuous life you happened to be struck by lightning at a moment when you were using bad language because you had broken a bootlace, you would inherit eternal torment.”

I’m not quite sure if I understand well what Russell means with the example of the cruel Spaniards. Does he suggest that these killers used the baptism as an excuse for the killing? Like ‘Well, we kill them, but we make sure their souls are saved.’ I think it depends on what he exactly points to with ‘their action’ in the last sentence: is this ‘action’ the baptism per se, or the killing ánd the baptism before that. I guess the first option as I can see no reason why orthodox Christians can’t condemn the killing, but approve the baptism itself. But it doesn’t seem to be interpreted so by some writers who quote this piece of text. Harris seems to think that it is an example of religious inspired cruelty.

But actually that’s not the point I want to raise in this post. What I would like to bring forward is that I have strong doubts about the historical accuracy of the events Russell describes here. To me the story seems far fetched. Although it is certain that the Spanish conquistadors have committed numerous extremely cruel acts, would they really take some time baptizing infants before killing them? And on regular basis as the use of ‘used’ in the quote suggests?

Unfortunately Russell does not give references in his essay, so a direct source for the story is not readily identified. Maybe it was common knowledge (or an urban legend?), but a search on the internet doesn’t give many other texts that mention such events with these particular details. In most cases you’ll find that the source for those texts is this essay by Russell.

A probable source however, is the work of Bartolomé de las Casas (1484-1566), a Spanish priest who wrote several influential books on the atrocities committed by the colonizers against the indigenous peoples. Las Casas was one of the first European settlers to arrive in the New World, was a slave owner himself (he was also involved in slave raids), and in 1510 became the first priest ordained in the Americas. A couple of years later Las Casas became convinced that the actions of the Spanish in the New World must be seen as illegal and that great injustice had been done to the Indians. Consequently he gave up his slaves and started to campaign for reforms.

In 1542 he wrote A Short Account of the Destruction of the Indies (original Spanish title: Brevísima relación de la destrucción de las Indias, published in 1552). An English translation of this book is available at Project Gutenberg. I couldn’t find an exact match with the events in the Russell quote, but you can find the following stories in this text (just copied the text and left the probable OCR errors in):

They snatcht young Babes from the Mothers Breasts, and then dasht out the brains of those innocents against the Rocks; others they cast into Rivers scoffing and jeering them, and call’d upon their Bodies when falling with derision, the true testimony of their Cruelty, to come to them, and inhumanely exposing others to their Merciless Swords, together with the Mothers that gave them Life.

This is about an incident which happened on Hispaniola. The other story played in Yucatan:

No Solifidian can believe the particular Narrations of their Barbarism, and Cruelty in those Countreys. I will only relate two or three Stories which are fresh in my memory. The Spaniards used to trace the steps of the Indians, both Men and Women with curst Currs, furious Dogs; an IndianWoman that was sick hapned to be in the way in sight, who perceiving that she was not able to avoid being torn in pieces by the Dogs, takes a Cord that she had and hangs her self upon a Beam, tying her Child (which she unforunately had with her) to her foot; and no sooner had she done, yet the Dogs were at her, tearing the Child, but a Priest coming that way Baptiz’d it before quite dead.

Especially the first fragment contains clear elements of the Russell quote, like the word ‘dash(t)’, but does not mention baptism. In the second fragment we see a ‘just in time’ baptism, but here it seems unlikely that the death of the infant was specifically aimed for. If this text is the ultimate source for the Russell quote, the beginning of the quote (“The Spaniards in Mexico and Peru …”) is also a bit off, as De las Casas didn’t write on specific events during the conquest of Peru as he did not witness those.

I think it is quite likely that the Russell quote is just a sloppy mix of these two stories written up by Las Casas, but I’m not sure. Whether Russell is responsible for this, we can’t know either, for he could have found this story somewhere else. Anyway, as long as no source can be found which gives clear evidence for events to have happened like Russell writes, I’m inclined to see this story as a fabrication.
Stories about extreme cruelty against innocent children or babies have been used for propaganda purposes on many occasions, just think about the Nayirah testimony or the anti-semitic blood libel. In this case the atrocities themselves are not questioned by me, only the baptism and the implication that religious motives were involved in these killings. I think better examples should (and can) be brought forward if you want to make the case that a strong belief in the afterlife is used as an excuse, or has even been the prevailing motive, for acts of cruelty in this life.

Addendum 2-2-2017
It is possible that distortion of the text from the book of Las Casas is quite old. The book has been used in propaganda against Spain since the 16th century, see Black Legend in Wikipedia.