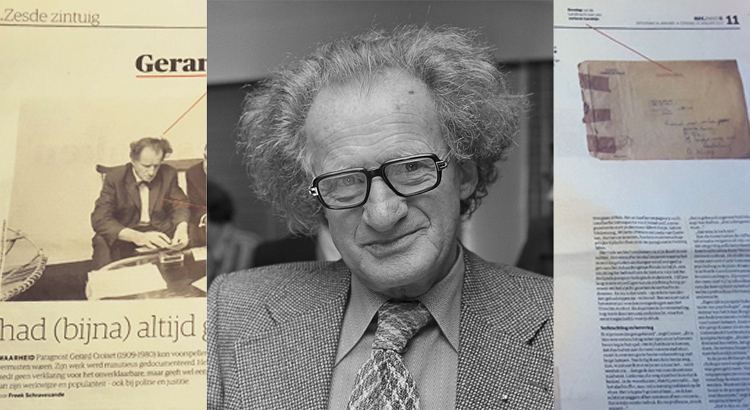 Last weekend NRC (one of the better newspapers in the Netherlands) had a long article on the activities of famous Dutch clairvoyant and healer Gerard Croiset as psychic detective under the title ‘Gerard Croiset was (almost) always right’. Reason for the article was the announcement that the archive of Croiset has now been indexed and that it will be made available to the public – although not online, as far as I know, you will have to visit Het Utrechts Archief (the archive of the city of Utrecht). The article remarkably only briefly mentions that Croiset has faced criticism and doesn’t mention that actually all of his mostly shared successes have been debunked by skeptics.

Croiset (1909 – 1980) was best known for his ‘help’ in missing childrens cases. In his biography on Wikipedia several famous cases in which he was involved are listed. His successes have been shown to be not very impressive when looked upon with a more skeptical mind. Also his collaboration with the police was in most cases not initiated by the police force, but because Croiset was asked for his advice by family of the missing persons.
One of the main reasons Croiset became famous was his long collaboration with the Dutch parapsychologist Wilhelm Tenhaeff (1894-1981). Tenhaeff eventually became the first professor in parapsychology at Utrecht University (as a ‘bijzonder hoogleraar’, which means his post was financed from sources outside the university). Croiset was the main project for Tenhaeff and he considered his psychic abilities genuine.

The Dutch journalist and skeptic Piet Hein Hoebens (1948-1984) investigated the claims around Croiset and discovered that the reports on the cases were not very accurate. In most cases Croiset’s predictions where vague to start with and became more accurate as he gained more information from the police or family. In the end he (or Tenhaeff) made it look like his later statements where made at the start. Also in many cases he was just completely wrong and you might expect some ‘successes’ considering the enormous amount of cases he was involved in, anyway.
Hoebens also showed that Tenhaeff had acted fraudulently in his reporting on several cases of Croiset, especially when he wrote about these in foreign magazines. One police officer who was confronted by Hoebens with what Tenhaeff had written in German magazine Esotera on a case this police officer had had to deal with Croiset’s involvement, pointed out several crucial points in the story where Tenhaeff was clearly lying. Tenhaeff refused to comment on this when Hoebens asked him about it before publishing the story in the Dutch newspaper Hoebens worked for (De Telegraaf).

It’s a pity that Hoeben’s articles in Skeptical Inquirer (1980-81) are not available online. A Dutch translation can be read on the website of Stichting Skepsis (his articles appeared in Skepter in 1988), though. I’ll see if I can pull some strings so that the originals will published as well [see update]. However I found a pdf of Zetetic Scholar no. 9 (1982) which has a long article by Hoebens, which covers four cases (‘Mystery Men from Holland II: The Strange Case of Gerard Croiset’).

For whom could this archive be interesting? As skeptics have investigated Croiset’s most prominent cases and have found normal explanations for his apparent remarkable feats, I think the remaining cases will be even less convincing. According to the article the archive contains 671 missing persons cases, but also 891 reports of healing sessions and 216 of so called ‘seat experiments’ (in which Croiset would write up predictions about the person who would be sitting on a particular chair in the audience during his performance later that day). Maybe the archive contains some material that might be interesting from a historical perspective. Because of his fame, Croiset was also in contact with notable people and was at least once asked tot visit Prins Bernhard (husband of Queen Juliana). But I somewhat doubt that there is really interesting stuff in the archive, otherwise the foundation which is now releasing the archive to the public would probably have told us before.

There are some videos on YouTube in which you can see Croiset (and Tenhaeff), like this fragment of an Italian programme (‘A proposito di ESP’) broadcasted in 1973.

2 thoughts to “The Archive of Gerard Croiset”