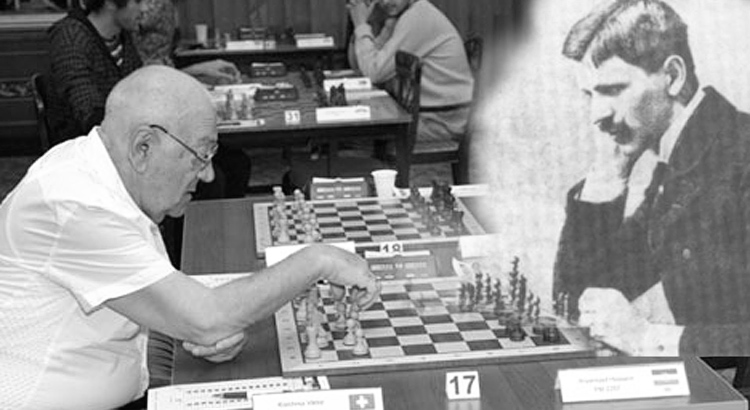 From 1985 till 1993 a game of chess was played under mysterious circumstances. A correspondence game between Viktor Korchnoi and Géza Maróczy. A secret trainings match between two strong grandmasters is not that unusual. Correspondence chess is somewhat more out of the ordinary. But what makes this case unique is that one of the two players had died more than thirty years before the game started …

The game was arranged by dr. Wolfgang Eisenbeiss, an economist, chess enthousiast and president of the Swiss association for parapsychology. He knew medium Robert Rollans (b. 1914), who could be an adequate intermediary for a game between a living grandmaster and one who had already died. Rollans himself couldn’t play chess, so he could not be suspected to make up moves himself. Eisenbeiss gave Rollans a list of a dozen interesting candidates (deceased grandmasters) to see whether Rolland would be able to contact them in the afterlife. In the mean time he began searching for a living grandmaster who would be willing to play.

Viktor Korchnoi took the bait. A likely choice: Korchnoi had become a Swiss citizen after defecting from the Soviet Union to the West. And he was also known for his interest in the occult after some skirmishes during the world championship match against Anatoli Karpov in Baguio 1978. Karpov had taken up a certain dr. Zukhar in his supporting team, who allegedly was trying to hypnotize Korchnoi during the games (more on this).

In his biography ‘Chess is My Life‘ Korchnoi writes that Eisenbeiss contacted him with the question against which deceased grandmaster he would like to play. Korchnoi suggested Capablanca, Keres and Maróczy. After a while Eisenbeiss returned to tell him that Capablanca and Keres had been found unreachable in the afterlife, but that Géza Maróczy was in for a game. Apparently all these three players had also been on the the list with grandmasters Eisenbeiss had given to Rollans.
The Hungarian player Maróczy lived from 1870 until 1951 and his main chess successes he achieved in the first decade of the 20th century. In 1906 he was set to play Emanuel Lasker for the world championship, but that match didn’t take place. When then official title ‘Grandmaster’ was initiated by the FIDE in 1950, Marcózy was among the living chess players who received the title straightaway because it was generally accepted that they had been the best players in their time.

On 15 June 1985 the game started with the move 1.e2-e4 by Maróczy. Rollans communicated with Maróczy via automatic writing. He wrote down the move Korchnoi had made on a piece of paper and played it on a chessboard as well (to be able to do that Eisenbeiss had given him some basic chess lessons). If he sensed that Maróczy had come up with an answer, he would sit down again and write this move as by itself. According to Rollans the spirit of Maróczy also gave an extensive analysis of the moves in the game, which Rollans could understand in trance, but was not able to reproduce as soon as he came out of this and looked at the move he had written down. Now Eisenbeiss would communicate this move to Korchnoi.

Korchnoi and Rollans first met in person during a German television programme shortly after the game, which came to an end on 11 februari 1993 when Maróczy resigned. Three weeks later Rollans died (2 March 1993). Not until 2004 had Eisenbeiss the game analysed by a certain Vernon Neppe, who stated that the game could not have been faked. I suspect however that Neppe is not a very good chess player. He does not appear in the ELO rating database of FIDE; Eisenbeiss does but his rating is not very high. ‘Because of major stylistic differences, the computer could not have simulated the game, nor could many living chess players play at this high a level’, Neppe states. This is complete nonsense.

After move 27 Korchnoi gave a brief comment in which he stated that Maróczy had made some errors in the opening and had played in old fashioned style. But he himself had not played very accurately in the follow-up and he was wondering whether his advantage was still enough to win the game. This was in September 1987 when the game was delayed because of the bad health of Rollans. The medium was often too ill for longer periods to contact the spirit of  Maróczy. In 1991 the game continued.

Korchnoi’s comments are peculiar. The opening play in this game had been far from old fashioned! From before 1951 (the year Maróczy died) I could find only a few examples in this variation (with the move 10. Kd1); after 1951 many hundreds. Korchnoi was right that his opponent erred early in the opening. 12. Bb5 is a weird, amateurish looking move (it isn’t among the first ten moves a strong chess program considers in this position for instance). Actually only 14. Bg5 was the first new move (14. Ng5 was played in a game in 1985), but also not a very good one.

Korchnoi is completely winning at this moment but with 17… Bxf3+ he plays a move unworthy for a grandmaster. And more poor moves by Korchnoi follow. It looks like he is deliberately aiming for an endgame that is still somewhat interesting. White misses his last chance for survival with 29. axb5 where 29. a5 was making it far more difficult for Black to win the game.
White’s level of play is not great. An amateur chess player like Eisenbeiss could have made these moves easily. Also the choice of opening doesn’t really point to Maróczy. In all his known games he played different variations on move 4.

More interesting for the question whether there are spirits of deceased people with which we can communicate, were the questions also asked to Maróczy. Eisenbeiss asked him 94 questions via Rollans. Many could have been answered easily by consulting books on famous chess players or old chess magazines. But there were also a couple of questions which would have been very hard to answer by someone who hadn’t been in the close vicinity of Maróczy.

Eisenbeiss hired someone to get answers to these difficult questions for himself: the Hungarian historian László Sebestyén, also member of the Budapest chess club. The answers to two questions are mentioned as extraordinary.

The first question is about a game Maróczy had won against a certain Romi in the tournament of Monte Carlo (1930). Maróczy’s position had been hopeless, but he got the opportunity to turn the game to his advantage and win the game, with an stunning move. The spirit answered that he didn’t know Romi, but that he knew a Romih (with an extra ‘h’), who had been a childhood friend. The game had been played in San Remo, not in Monte Carlo. Sebestyén found sources in which the Italian Romih was mentioned with and without ‘h’ and could not get to the bottom of this. Later Eisenbeiss found the tournament table of the San Remo tournament in which Romih was spelled with the ‘h’. Romih had been a Slovenian and dropped the ‘h’ from his name after the tournament, which resulted in a more usual looking name for Italians.

The second interesting question had to do with the ‘Vera Menchik club’. Menchik became the first women’s world chess champion and had been a pupil of Maróczy. In that era it was not yet common that world class players would occasionally lose from a woman. Someone joked that by losing from Menchik you would automatically become a member of the ‘Vera Menchik club’. The spirit of Maróczy was asked who had ‘founded’ this club. During a couple of sessions the spirit let know via Rollans that he was uncertain about the answer and first gave Spielmann and Grünfeld als possible candidates. Then on 21 August 1988 he suggested Albert Becker, but stated at the same time that it could not be true because Becker had just emigrated to South America at the time. Coincidentally the right answer (Becker!) had been published in the well known chess magazine Schachwoche three days before. Eisenbeiss mentions that he saw in this a clue that it really was the spirit of Maróczy and not Rollans who gave the answers, because the latter would have given the correct answer with more conviction if he had picked it up from this magazine.

An obvious starting point for an explanation for the game and the answers to the questions is Eisenbeiss. Concerning important issues of this case we know only what he has made public about it. And of course there is no way to check. It is telling that he himself only wrote about the case in 2006 (in the Journal of the Society for Psychical Research), so after Korchnoi mentioned it in his biography (the elaborate second version). The other main characters in this story had already died by then (Rollans shortly after the game and Sebestyén in 1996).

Maróczy seems to be a fairly random choice but the stories of Korchnoi and Eisenbeiss do not match up completely. Why Maróczy? Were there not more interesting candidates? To me it is surprising that Korchnoi had him on the third place. It could be that Eisenbeiss had gotten hold of diaries of Maróczy (at least Sebestyén found them) and was able to manipulate the selection of the deceased player. It is also possible that the order of posing the questions to Maróczy and the research by Sebestyén was just the other way around. Maybe Sebestyén was sent to find the answers without telling him exactly for what purpose Eisenbeiss needed them.

There is a nasty side to the story of Eisenbeiss. On 10 July 1988 the spirit of Maróczy tells about his motives to participate in the experiment (see second source linked below). But then he also makes a denigrating remark about his fellow country men who had not been hospitable and had shown themselves reluctant to cooperate with Eisenbeiss in his search  for more background information on Maróczy. This seems to point to the refusal by the still living children of Maróczy to receive Eisenbeiss when he visited Budapest earlier that month. They had clearly no interest in this spiritistic business when they found out what it was really all about. It looks like Eisenbeiss took this ‘defeat’ badly and kicked backed at them, making it look as if their father was not amused.

More on this case which also features in The 20 Most Convincing Spirit-Contact Cases:

This article is a translation of my Dutch post on Kloptdatwel on 1 August 2012 when Korchnoi was still alive (he died 6 June 2016) : Schaken met een dode.