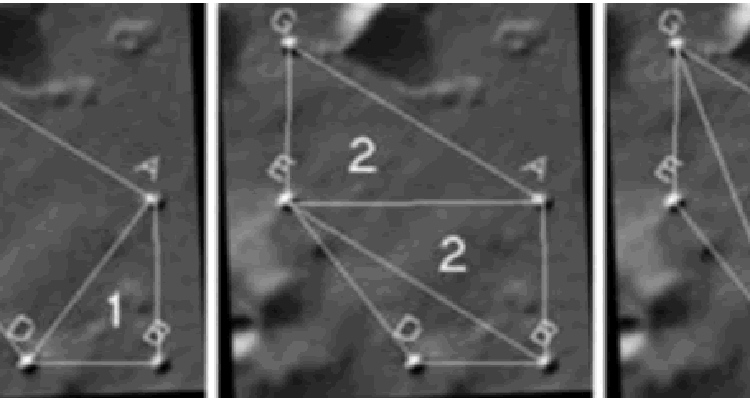 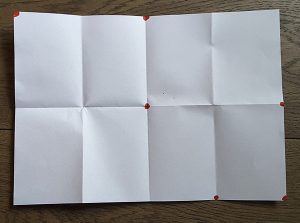 Take a piece of A4-sized paper and fold it over three times. Unfold it again, put the piece of paper in front of you and mark six points like on the photo here on the left. Stick it to your window and you’re done. You have just transmitted a message with deep mathematical propositions to your neighbours and the people walking by your house: about prime numbers, the Pythagorean theorem, points of tangency from the tetrahedron in its circumscribed sphere, and even something about electron spin! Don’t you believe me? Does it sound like someone from another planet talking to you? Good, then you’re thinking in the right direction.

The Mounds of Cydonia

In November last year Horace Crater, Stanley McDaniel and Ananda Sirisena published an article in the Journal of Space Exploration: The Mounds of Cydonia: Elegant Geology, or Tetrahedral Geometry and Reactions of Pythagoras and Dirac? These three scientists, unknown to me before reading their article, apparently have been investigating a number of small hills on Mars. These hills or mounds could contain a message of an alien civilisation, which is coded in the mathematical relationships between their positions. The mounds are situated not far from the so-called ‘Face on Mars‘, a mountain which looks like a face on the fairly unsharp photos made by the Viking orbiters during their missions in 1976. During later missions more detailed photos became available and the resemblance was gone.

Less known are the rock formations close to the Face on Mars in the Cydonia region, which according to some people, point to artificial constructions. Twelve mounds have been identified that show up more clearly than other mounds (higher in albedo) on the Viking pictures. By drawing numerous triangles with these points it was found that a lot of the angles were more or less straight or whole multiples of a ‘base angle’ of 19.5 degrees. This was discovered by Richard C. Hoagland, who was also responsible for the popularisation of the ‘Face on Mars’.

Crater and McDaniel have published a couple of articles about this formation of mounds. They focus on five of the twelve so-called ‘Mounds of Cydonia’ and at a later stage try to fit a sixth point in the pattern they claim to have found.

There is some rationale behind the idea that mathematical or geometrical constructions can be used as a means of communication with aliens. Mathematics doesn’t really depend on language, the meaning of a figure of Pythagoras’s theorem will probably be recognisable for any advanced enough civilisation. You could also use the prime number sequence, like in Contact by Carl Sagan.

It is a bit easier to talk about the discoveries of Crater and his co-authors when we have look at the following figure which is an idealised version of the pattern they think to see (the labels ‘r’, ‘s’ and ‘t’ I’ve added for easier reference). They talk mainly about the pentad formed by the points B,D,E,G and A. Point P is the sixth point that fits the pattern well, they argue. 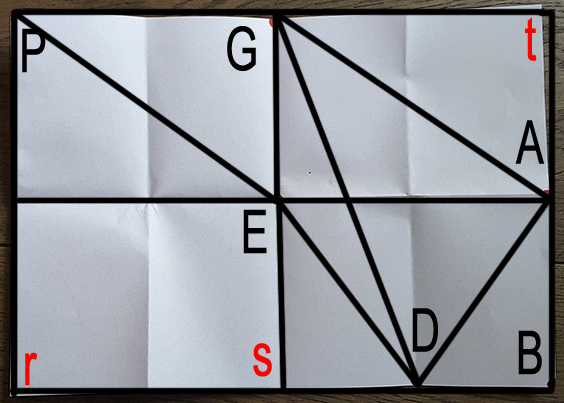 Now you actually only have to know that the sides of the big rectangle (PtBr) have the ratio √2:1. If you look at a half of this rectangle, for instance the rectangle tBsG, then you’ll find the same ratio – and this pattern continues if you keep on halving the rectangles. This is characteristic of the paper sizes we know as A0, A1, A2, A3, A4, A5, A6, etcetera. OK, nice so far. But Crater and his buddies have only just started.

We’ll look for some prime numbers now. Take the area of the smallest rectangular triangle DAB to be unit 1. Then triangle EDA has area 2, triangle DAG area 3, pentad BDEGA area 5 and the figure with vertices BDEPGA has an area of 7. So according to the authors we now clearly have the start of the prime number sequence 1, 2, 3, 5, 7, … A mathematician like me will probably read the rest of the paper with some hesitation now that 1 is called a prime number, but also because they seem to be rather selective in picking the areas of interesting figures. Why didn’t they also take the tetragon DEGA with area 4 (which they do mention but leave out of the sequence without any argument) and pentad DEPGA with area 6?

The numbers 2, 4 and 6 are being used however by these mathematical geniuses to state the following:

At 89 this ‘generating feature’ stops, because the next prime, 97,  is 8 more that 89. What is the message the authors want to convey with this? You can always write something down like this when you have found the numbers starting from 1 to 7, for instance in Miffy’s Counting Book. And why did they use 2, 4 and 6 here? Well, first look at the smallest rectangular triangle BDA and take side BD as 1. Then AB is equal to √2 and AD equals √3 (using Pythagoras’s theorem). The triangle AEG is similar in shape (the ‘middle sized triangle’), only a factor √2 bigger. Its sides have lengths √2, √4 en √6. Et voila, there we have our 2, 4 and 6! The logic in this is unmistakable, isn’t it?

But things get even worse. The √2 which we found as the ratio of the sides of our A4-sized piece of paper you can also find in three-dimensional figures, like the tetrahedron. With a little trial and error, it is not difficult to find parts of the pattern in cross-sections of this tetrahedron. Or you can even find the ‘base angle’ as the “tetrahedral latitude because when a tetrahedron is embedded in a sphere, its base marks that latitude on the sphere.” Duh. You could now start to think about what this all means, but the authors already have another miracle to show: with the √2 in mind it is also possible to get a projection of a model for electron spin which fits the pattern. I’ll spare you the details.

I do understand however why the authors want to draw the attention to the tetrahedron. The Platonic solids, of which the tetrahedron is one specimen, are mentioned like the prime numbers as clearly recognisable mathematical material, which would make the solids suited as a purposeful signal to aliens. But I think that’s something quite different than hiding √2 somewhere in your pattern.

How could someone create this?

Based on the high-resolution images a geologist was able to explain the authors about the likely origins of the mounds, they are probably the remnants of mud volcanoes. These have a natural origin, but the authors point at the disaster at Sidoarjo, Indonesia, where since 2006 huge amounts of mud are flowing out of a borehole. If we on Earth can cause such an eruption of mud by accident, it is perceivable that an even more advanced civilisation could do this on purpose on a location at will, isn’t it? And if a number of mounds were already almost in the right place for such a message to start with, maybe only a couple would have to be added tot complete the pattern. At least that’s the far-fetched theory of the authors. If true, the aliens have been quite lucky that in the meantime no other mounds have formed naturally in the area of the design, which of course would have made the message unreadable …

How accurate is the pattern?

Eventually, that’s the main question when we want to evaluate the claims in the article. In the Viking photos, the smallest details have a real size of about hundred meters. The newer material has a far higher resolution: one pixel = 5 meters. I think it is good to have a look yourself to get some feeling for the level of detail. Below is an image taken by the Mars Orbiter in 2012 (click the image for an enlargement).

What can we say about the precision of the pattern if we look at it with the newest imagery? Apart from the geology of the mounds, that’s actually the only thing which is new in this article. All that talk about prime numbers and electron spin you can already find in an article by Crater from 2007. The authors calculated for various angles in their pattern how big they should be in an idealised pattern and compared those numbers to the ones you find when you measure them from the photos. First, you have to turn the photos so that the resulting image gives the picture from looking from straight above. The angles found deviate from the ideal ones between a couple of tenths of a degree to several degrees. How this translates in deviations from the ideal pattern in meters on the surface, the article doesn’t mention.

In these calculations, the authors didn’t use the summits of the mounds as vertices but left some wiggle room. A computer program calculated the best fit allowing the vertices to shift position within a rectangle drawn around each mound. I think this means that the vertices they eventually used in the best fit can be dozens of meters away from the actual summits. Well, I guess we should think about those physical summits only as suggestions for the real points of the pattern. What is a bit worrying is that the accuracy of this fitting exercise is quite a bit less good with the newest set of images. Can’t be seen as good news for the speculative hypothesis.

The authors however, state that finding such a pattern by chance is astronomically unlikely. Mathematician Ralph Greenberg has criticised this idea before by pointing out that Crater c.s. only look at the angles of their favourite pattern. If you would look at all possible mathematically interesting patterns, you would probably find that it is quite easy to tell an interesting story when you draw twelve dots at random on a surface (including the use of the fitting method). With the five points Crater focusses on, this √2 pops up as the most likely ‘message’, but when the twelve points had a different position, Crater might have found another set of points which tell a story based on the Golden Ratio, π of e.
I also find it quite remarkable that the authors don’t seem to have investigated whether the twelve mounds on the Viking pictures still stand out as the most prominent features of the newer images. Mound ‘B’ doesn’t look more interesting than a couple of hills close by which are not part of the twelve original mounds.

Of course, this all looks an awful lot like the calculations you find in Pyramidology. Prof. Cornelis de Jager, former chairman of Skepsis and CSI fellow, once wrote a nice parody in which he finds all kind of constants in physics by measuring parts of his bike. It appeared in English translation in Skeptical Inquirer (‘Adventures in Science and Cyclosophy‘, 1992), but that’s not online, so you’ll have to do with the Dutch original: Velosofie, Skepter (1990).

45 thoughts to “Far-fetched Mathematics on Mars”