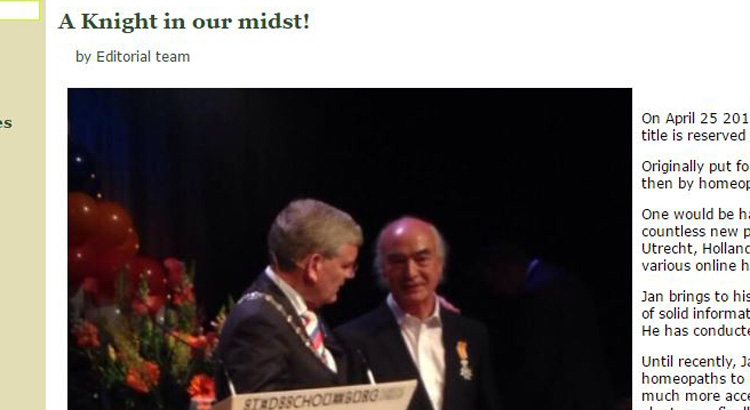 In the Netherlands the day before Kingsday we have what is called ‘de lintjesregen’: hundreds of people get a decoration in name of our king. If you think someone deserves to be decorated, you can nominate him or her quite easily via your city council. A nomination will be checked, but sometimes someone slips through who should not have gotten a decoration if all relevant information was known by the institutions who decide on this. This also happened in 2014 when internationally well-known homeopath Jan Scholten got knighted. Apparently, some bureaucrat in Utrecht, the city where Scholten lives,  missed his involvement with a very dubious trial in Kenya in which Scholten’s own homeopathic remedy Iquilai was tested on people with hiv/aids.

Naturally, homeopathy fans worldwide were pleased: A Knight in our midst! proclaimed Interhomeopathy for instance. People like me, w 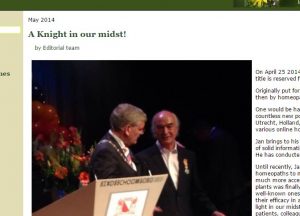 ho knew about his unethical trial in Kenia, were less pleased. It has happened before that quacks got decorated, but this case is really disgraceful, I think.
Scholten promotes his Iquilai with another homeopath, Leo van Gelder, via the Aids Remedy Fund, a not-for-profit foundation. Both men are medical doctors, not just lay homeopaths, and are therefore bound for instance by the Declaration of Helsinki for medical research. A medical doctor who gets decorated must have an impeccable track record, which was clearly not the case with Scholten in my opinion.

The remedy is called Iquilai, derived from equilibrium, or balance, and is prepared from the Lanthanides group of this system which is known for its strong positive influence on the immune system. In a pilot study into the efficacy of Iquilai involving some 228 patients, the new remedy has proven to be highly effective in improving the clinical status of patients with HIV/Aids.

Anyone with some understanding of medical trials can read for themselves what a mess this pilot study was. Or read what David ‘Orac’ Gorski wrote about it in 2010:

So why is this “study” so questionable? Let me count the ways. First, it included patients on and off antiretroviral therapy. That in and of itself wouldn’t necessarily be a problem for a pilot project, but nowhere is it adequately described how many patients taking ARV improved on Iliquai [sic] compared to how many not taking ARV. More importantly, there is no control group. We have no idea if the number of patients who improved is typical for any patient with HIV or AIDS who simply undergoes routine care for HIV/AIDS, even in Kenya. In fact, when it comes to the quality of life measurements, this study design is almost guaranteed to produce apparent “improvements” just based on the fact that the people doing the measurements know that every person they evaluate periodically is taking the remedy being studied. As for the alleged improvement in an objective measure, namely CD4 cell count, which was claimed to have improved significantly, it turns out that if you read the study you’ll find that only 51 out of the 228 patients had serial CD4 counts drawn at three intervals and 85 at two intervals. That’s only a little more than half of the patients enrolled on the study. No reasons are given for why so many patients didn’t have more than one CD4 counts drawn; we have no idea what happened to their CD4 counts; and no description is given to show whether the group that did get more than CD4 level drawn was the same as the group that did not. Moreover, if you look at the table on page 17, you’ll see that the values are 161 ± 93 at the beginning and 284 ± 126 at the end, a rather large overlap that is claimed to be very statistically significant. Maybe so, but again without a control group and not knowing what happened with nearly half the patients I remain underwhelmed. This is not the sort of highly compelling data that would lead me to start to question huge swaths of established science. Extraordinary claims require extraordinary (or at least copious amounts of) evidence, and this study doesn’t qualify.

Questions in Parliament and an investigation by the Health Inspection

I tweeted my surprise about the news of Scholten’s decoration. And this was picked up by Barbara Vreede who wrote a very angry article on this blunder on Science Palooza, which was later republished by De Volkskrant, one of the major newspapers in The Netherlands. Also famous hiv/aids expert Joep Lange was outraged by the decoration of Scholten, because of what he did in Africa:

‘It is unbelievable that this man was given an honour,’ aids expert Joep Lange told the Volkskrant. ‘Using it means patients either don’t start taking proper medicine at all or do so too late.’

Two members of parliament asked questions about this to health minister Edith Schippers. She answered that she was not able to revoke the decoration as this is only possible when the decorated committed a crime for which he would get a jail sentence of minimal one year. However, she ordered the Health Inspection to start an investigation to find out whether Scholten and Van Gelder had violated rules all medical doctors have to adhere to.

In October 2016 this investigation led to a formal sitting by the (regional) Disciplinary College which reluctantly acquitted Scholten and Van Gelder, because according to the verdict the Kenyan doctor involved should be considered the person with final responsibility for organising this trial. Also the Inspection was not able to convince the Disciplinary College that people participating in this trial were encouraged to abstain from regular medication, although the reports mention that only half of them took ARVs (of course it could be that ARVs were not available to those patients anyway).
The Health Inspection has appealed and we can probably expect a verdict any time now as the case has had a first sitting at the Central Disciplinary College recently. The Vereniging tegen de Kwakzalverij (Association against Quackery) reports on that. Apparently, Scholten and Van Gelder brought with them some thirty supporters and even a film crew to capture the sitting.

I will follow up on this post, when the verdict of the Central Disciplinary College will be published.

The Association against Quackery reports that the Central Disciplinary College has given both homeopaths an official warning. The college acknowledges that they’ve acted in violation of the Declaration of Helsinki regarding medical research on several points. But because they ‘acted out of  good intentions’ they only get this light sentence. Mindboggling.