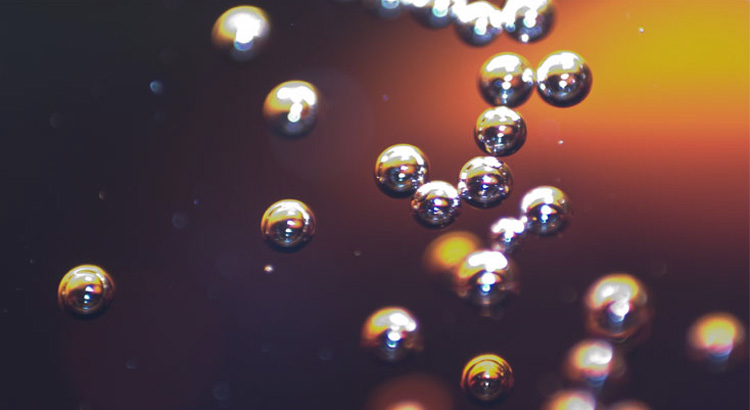 It has become common knowledge that drinking too much soft drink will make you fat because these drinks usually contain quite some sugar. Even light soft drinks are suspicious because your body expects the sugar boost and when this does not come, you’ll start looking for energy in other food items. But research from the Birzait University in Palestine seems to indicate that also the carbon dioxide, which gives the bubbles in soft drinks, might be a problem.

This was shown in an article published in Obesity Research & Clinical Practice (Elsevier): Carbon dioxide in carbonated beverages induces ghrelin release and increased food consumption in male rats: Implications on the onset of obesity by Dureen Samandar Eweis, Fida Abed and Johnny Stiban. 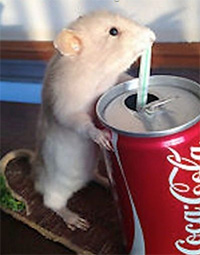 In short: the researchers divided the rats into four groups which each got one of the following beverages to drink: tap water, a carbonated soft drink (so a normal soda with gas), a zero-calory soft drink with gas or a degassed normal soft drink (the carbon dioxide was removed by stirring the normal drink for two hours). They were a given standard diet for rodents in laboratory conditions, from which they could each at much as they felt like. After 110 days the rats that got fizzy drinks weighed on average 450 grammes, but the other rats only 380 grammes. If you take this for granted, it looks like carbon dioxide should be considered the main culprit in causing obesity and not the sugar. Quite surprising.

May this year this was picked up in English media in articles with headlines like: Fizzy water could cause obesity by encouraging you to eat more, EAU DEAR Fizzy water could make you FAT, reveal scientists…and you could be better off drinking ‘flat’ sugary drinks, and Fizzy water could be making you fat – here’s how.
I learned of this research from the Dutch newspaper De Volkskrant, which in general has a very good reputation in writing on scientific subjects. In this article endocrinologist Aart Jan van der Lelij was asked for his opinion. He was charmed by this study which seems to be set up properly.
It is all about the hunger hormone ghrelin. Higher levels of this encourage you to eat more. The researchers also did measurements on the intestines of (other) rats that were treated with the four different beverages, just after killing them. Those show that ghrelin levels rise after ‘taking’ the fizzy drinks.
So now we have a chain of causes: drinking carbonated drinks raise ghrelin levels -> more ghrelin encourages you to eat more -> if you feel hungry and food is available, you’ll eat more -> eating more makes you fat. This seems quite plausible at first sight. Exactly how the consumption of carbon dioxide is causing the rise of ghrelin levels remains unclear. Van der Lelij doesn’t think that the explanation given by the authors of this study – the stomach gets expanded by the gas – is an adequate answer.

Most news reports about this research noticed rightly so, that this result comes from experiments on rats and that you cannot extrapolate this to humans straight away. Also mentioned are other causes which could explain the difference in weight, like a different exercising pattern, other diets. But in the article there are no clues that this might be the case. Other remarkable matters can be found, however. More on those further on.
Also, the study features an experiment with 20 male students who drank the different beverages and it was found in blood samples taken from them that ghrelin levels were higher when they had drunk carbonated drinks.

Read the full article, not just the abstract!

Of course, it is better to read the full article than to rely solely on what is in the abstract. Who does that, finds out straight away that the experiment is about only sixteen rats. Just four per group! I found this number mentioned only in an article by The Independent. This low number of rats per group didn’t withhold the authors using a standard statistical test (ANOVA) to look for the significance of differences on a number of variables. You would expect an explanation in the article for this being a reasonable choice because the number is far below generally accepted minimal requirements for using this method. And were they really expecting such a huge effect that they thought four rats per group would be enough to show a significant difference?
It also struck me as odd that they did mention the number of human participants in their side experiment in the abstract, but forgot to mention the number of animals in the main experiment.

The weight gain of the rats shows something remarkable too. According to the article, the rats were weighed every day during the experiment. Then figure 1A clearly misses some data between days 25-50: 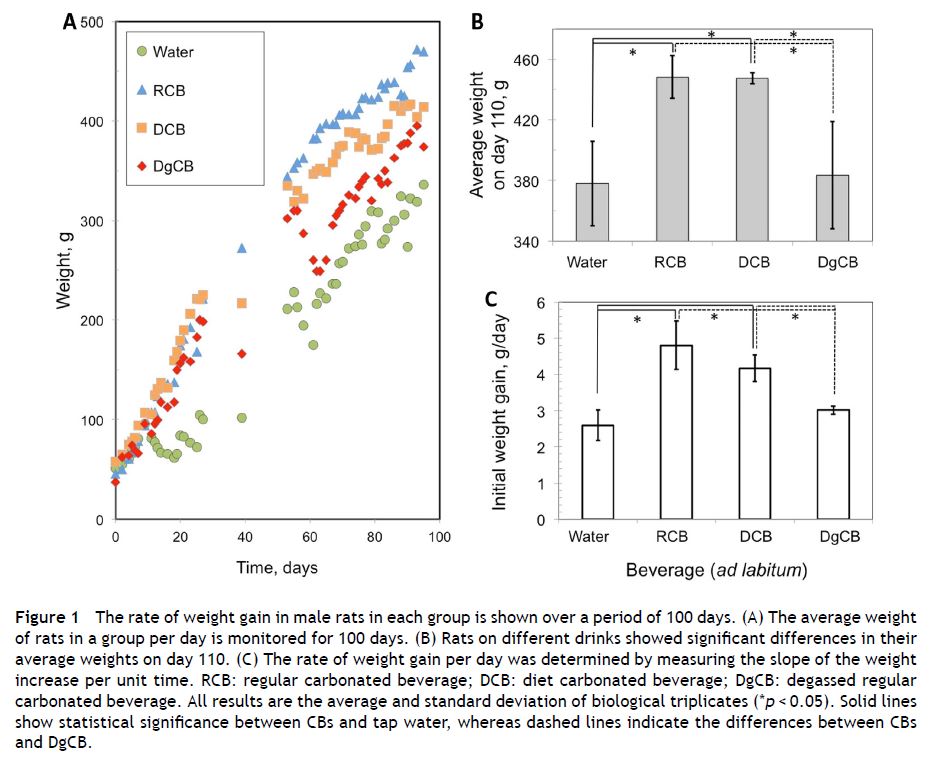 Also, the group on the degassed soft drink apparently dropped in weight twice. What could be the reason? And why is the result given after 110 days? From the article, we learn that the experiment ran for a year. At six months blood samples were taken and after one year the animals were sacrificed so that their livers could be examined for lipid depositions. Why are we not given the weights at those moments?

I contacted the corresponding author, Stiban, on these matters. He told me that indeed the rats were not weighed every day. His students were not able to tend to the rats on official closing days of the university and on days of religious feasts. The rats were kept on their designated beverages for the whole year, but the weights were given only for the first 110 days because “the onset of weight gain was much more pronounced early on.” Apparently, the difference of weight was still present at the end of the experiment.
The loss of weight which occurred in the group of rats on degassed soft drinks during two periods was not investigated deeply. It didn’t seem likely that it was pathological as they quickly started to grow at a normal rate again.
Concerning the statistics, Stiban told me honestly, that he wasn’t really aware of the ins and outs of different statistical methods and performed the analysis as asked by the reviewers.

There are more issues you could have with the setup. For instance, it appears that the rats in each group were caged together. This would lower the statistical power even more. But as the number of rats is as low as four per group, I don’t think it makes things much worse. More important is that a very obvious control group in testing the hypothesis is missing: a group of rats on carbonated water.

At the end of the article some people are thanked, amongst them the twenty students who took part in the side experiment:

Moreover, it can not be underestimated that the brave students who battled hunger and the horrible taste of degassed beverages provided a key piece of data for the successful completion of this study.

This could make you think that the awful taste might play an important role. Did the rats in the group on degassed soft drinks perhaps simply lost their appetite because of this?