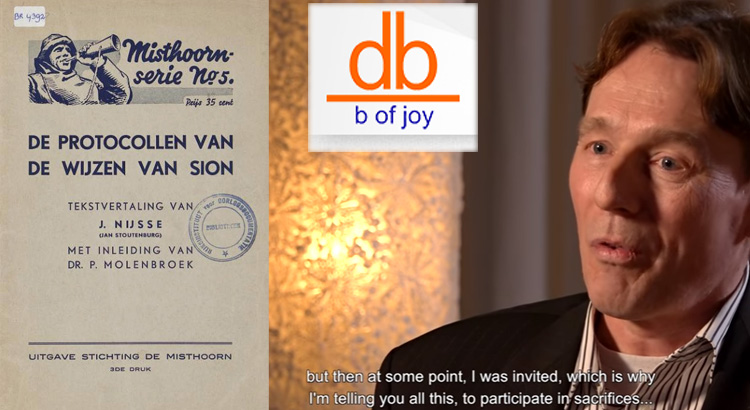 A series of interviews has been making the rounds on conspiracy websites in which Dutchman Ronald Bernard talks about a sinister elite of about 8000 Luciferians who rule our world. According to Bernard, he was involved in all kind of financial services for this elite. He crashed emotionally and physically when he was invited to participate in child sacrifices, which take part during their satanic ceremonies.

Nowadays, Bernard is trying to make the world a better place, for instance with his B of Joy, a grassroots initiative which aims to be “a full reserve, interest-free, community bank”, “based on good stewardship of all life.” Bernard also encourages his listeners, however, to read the infamous and antisemitic Protocols of the Elders of Zion, which he apparently sees as a blueprint that is getting implemented in our lifetime.

Three parts (out of five) have been published online at this moment. They are made by Irma Schiffers, who last year co-founded Dutch website, Coöperatie De Vrije Media, which brings the usual conspiracy theories and anti-vaccine propaganda. Only the first part was published on that website, as she recently decided to go her own way.

You can have a look at his bizarre story yourself, but don’t expect any proof as he delivers nothing as such, we are expected to believe him prima facie. The most bizarre statements are in part 1, at about 22:50 the insane story on the Luciferians starts, and at about 29:15 you can here him on the Protocols.

Is Bernard an antisemite or ‘just’ a crank?

Fellow skeptic Frank Verhoft from Belgium visited one of Bernard’s presentations in June this year and wrote on about it on his weblog. Verhoft noticed that Bernard used an image of the cover of a Dutch translation of the Protocols. In his presentation, Bernard had cut off the top of the cover which made it a bit of a search to find where he got it from. Verhoft found out that is was published in a series by De Misthoorn, according to Wikipedia “probably the most aggressive antisemitic magazine ever published in the Netherlands.”

A lecture from 2016 also contains elements which you could consider antisemitic. Bernard mentions the ‘Waterloo legend’, about the Jewish banking family Rothschild. And at 29:35 he shows a cartoon, which has its roots in extreme right circles. It’s a slightly altered version of a clearly antisemitic cartoon which caused some controversy when the leader of the Austrian far-right party FPÖ shared it on Facebook.

Though this lecture and the interview are laden with conspiracy theories and naive critique on the current banking system, I didn’t find explicit antisemitic remarks. But telling your listeners to take the Protocols seriously without pointing out its dark origins is pretty dubious. Also on Facebook Bernard points his followers to a YouTube video on the Protocols which does not mention they have been proved to be an antisemitic hoax.

Verhoft and I were quite surprised that mainstream media had not yet asked questions. On the contrary, in January this year, Bernard was interviewed by De Volkskrant (one of the main newspapers in the Netherlands) and nothing of all this was mentioned. (Fun fact: this interview was a reason for infamous conspiracy website Infowars to take Bernard seriously.)

A quick look on Bernard Social Media accounts would have learned that he is deep into all kind of conspiracies, from chemtrails, anti-vaccination myths, to believing that climate change is a hoax. Websites like Familieblij.nl and GozoGreenCoop are registered in his name (under his alias Ronald Blij).

Many of the people involved in the B of Joy (or ‘De Blije B’, as is the Dutch name) are easily found spreading the most ridiculous crank ideas as well. Which made me wonder why there were also a couple of people on the advisory board, who you would not likely associate which such ideas. 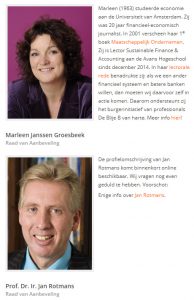 Academics leaving the International Advisory Board of B of Joy

Before publishing my article (on Kloptdatwel) on Bernard’s interview and the research I did on his background, and that of other people involved, I contacted the two people in the International Advisory Board, who hold academic positions: Jan Rotmans (professor in transitions and transition management at the Erasmus University Rotterdam) and Marleen Janssen Groesbeek (lector Sustainable Finance and Accounting at Avans University of Applied Sciences). Me and Verhoft had repeatedly asked them questions on this matter via Twitter, but they seemed to ignore us (although they did notice our remarks).

In reply to my email, they let me know (clearly annoyed by my questions) that they didn’t believe anything of the stories told by Bernard. But apparently, it didn’t seem to bother them too much as they both continued to support the B of Joy.
After the publication of my article, however, other journalists got interested as well.  And only now Rotmans and Janssen Groesbeek decided to step down. De Volkskrant (the same newspaper that had published the uncritical interview with Bernard in January this year) wrote about the matter on Saturday, August 26th 2017 and apparently, this attention made them take the wise decision to cut ties with the B of Joy and Bernard in the end.

Fake news on the death of Bernard

The third part of the interview was released August 22nd, just a couple of days after I published my article on Kloptdatwel. In this part, Bernard responds to some critical remarks (from other conspiracy websites) on the previously released videos. Mainly on the fact that he didn’t show any proof whatsoever that he was indeed involved in financial operations during 1982-1994. The people who dare question his story because of the lack of proof or a curriculum vitae are just “hufters” (=bastards) according to Bernard. He also adds more incredible stories, about illegal (child) organ trade, in which Dutch nurses would have been involved in the late ’70s.

On August 24th fake news website Newspunch brought this story: Ronald Bernard, Dutch Banker Who Exposed Illuminati, Found Dead, in which the author states that this ‘former Illuminati banker’ had been found dead in Florida. Although in the comments under this article it was quickly pointed out that this dead man had the name Ronald Bernard Fernandez (Ronald and Bernard being his first names) and that this is a completely different person who was found dead in July, this story makes the rounds these days on many conspiracy sites and is bound to become a classic (“Illuminati banker found dead after blowing the whistle on child sacrifices”).