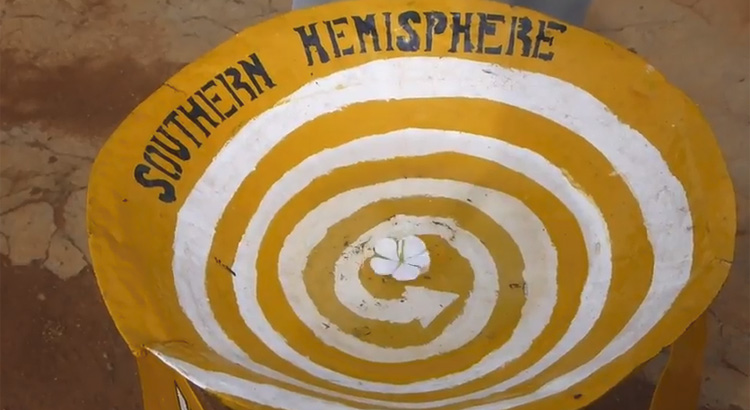 The story that the direction of the swirl you see in the water when bathtubs or toilets are drained is determined by the hemisphere you are on will probably sound familiar. I think most of you will also know that this is a bit of an urban legend, as the force of the Coriolis effect which is supposed to determine this direction is rather small compared to other influences like the shape of the basin and turbulence still present in the water before draining. In practice, you’ll find that toilets flush either way on the northern and southern hemisphere, and many times a particular basin can be found to show different swirls on separate tries.

However, on several spots where you can cross the equator by road, you’ll find performances for tourists which apparently show the effect of the Coriolis effect. It is not very difficult to do this trick. Look for instance at this guy working at Uganda Equator, who has been doing this for quite some years. You can find numerous videos of his performance on YouTube.

Probably he manages to force the direction of the swirl by lifting up his ‘stabilizing’ divider in a subtle way. Or the bowls might be formed to drain in a particular direction. Note that for a more convincing experiment he should use the same bowl in all three positions.

But there’s another thing about his performance which made me laugh when I noticed. He actually messed up the theoretical directions the bowls should drain because of the Coriolis effect: on the northern hemisphere it should be counter-clockwise and on the southern hemisphere clockwise! Or does he realise that he is showing the wrong directions and this is just an extra layer in his performance to please the bystanders who know that this is a trick and also know how the Coriolis effect works? 😉

A nice explanation of the Coriolis effect can be seen in this YouTube by Veritasium:

Update 28 April 2018
I’ve made contact with the guy in Uganda via Facebook. He denies he is using tricks (not that I was expecting him to acknowledge that), but also completely ignores my comments on him having mixed up the directions. I’m definitely not the first person to notice his mistake (see for instance Travel Myths: Water Drains the Opposite Direction in the Southern Hemisphere), but I’m quite curious whether other people have pointed this out to him (or his Kenyan colleague) during a live performance on the spot and how he would respond 😉