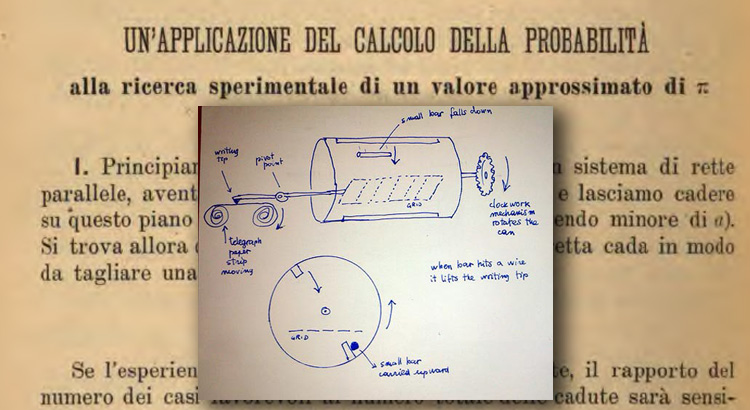 If you are somewhat interested in math, there is a good chance that you have heard about Buffon’s needle before. It is a problem that involves geometry and statistics and it originates from the 18th century. In the most common version, you throw a needle of length l on a pattern of parallel lines which are a distance d apart. The change that the needle will cross a line (or more) of the pattern depends on the famous number π. 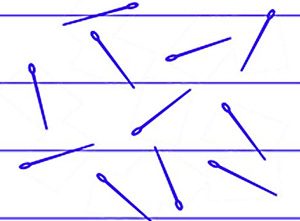 If you repeatedly throw needles and keep track of the numbers thrown (N) and the number of hits (H), you can approximate π with the following formula:

For a proof of this formula, you can whatch the YouTube-video I’ve embedded at the end of this post.

Several people actually tried to approximate π in this way and the most famous result was the one Mario Lazzarini achieved and published about in 1901. One of his series of throws gave the following intermediary results:

The result after 3408 throws and 1808 hits gives a remarkably accurate estimation of π. Too good to be true as some mathematicians noticed some decades later. It is quite easy to find out that with the dimensions of the grid and needle Lazzarini used (l = 2.5 cm, d = 3 cm), the formula comes down to:

where 355/113 is a well known, very good rational approximation of pi. It looks like Lazzarini did choose the length of his needle and the distance of the lines of the grid wisely, but he would still have to be lucky. It all looks too good to be true. The first to publish doubts about these results seem to have been Thomas O’Beirne and Norman Gridgeman in the 1960’s. But it was an article by Lee Badger in 1994 which put the final nail in the coffin for Lazzarini’s experiment. References to their articles can be found at the end.

John Maddox, editor in chief of Nature, wrote about Badger’s article, in an editorial in his magazine :

[…] Badger describes the result as “lucky.” That is a charitable way of putting it. The truth is that if Lazzarini’s result had been published in 1994 and not in 1901, it would be called a barefaced fraud. Indeed, Badger himself, after elegantly demonstrating that Lazzarini’s good luck must somehow have been contrived, himself uses the word “hoax” to describe how an even better approximation to pi might be obtained. In short, Badger’s tale should be a warning to all those who pollute the literature that their misdeeds will follow them to the grave.

The results of Lazzarini are therefore generally seen as fraudulent and most will doubt that he actually performed the experiment. See also the section about the approximation from Lazzarini in the Wikipedia article on Buffon’s needle (version 20 May 2018).

A closer look at what Lazzarini actually wrote and in what journal might have shed a more positive light on the experiment of Lazzarini. In the most recent edition of Skepter, the magazine of the Dutch skeptics foundation, Hans van Maanen has published an article which looks in detail at the original Lazzarini article and comes to the conclusion that it was most likely a joke. And that the audience for which the article was intended would have recognised it as such.

Lazzarini describes that he built an apparatus that would automatically perform throws of small bars (the needles) on a grid of wires and record hits and misses without human interference. He could leave the machine at work by itself for hours, it would do 24 throws a minute. Based on the description (in Italian) prof. Luigi Garlaschelli (from the Italian skeptic organisation CICAP) made a sketch, which illustrates quite well how this machine is supposed to have worked: 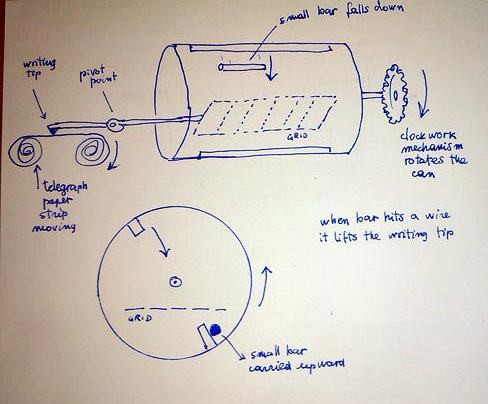 This machine could simply not perform Buffon’s Needle properly for several reasons. First, the small bars would fall off the supports way before arriving at the top of the drum (this can be fixed, but then there would be other trouble with the description Lazzarini gave). But it also obvious that in this way there is no guarantee that the bars will stay horizontal during their fall down, they will probably start to turn in the vertical direction as well and then the formula used doesn’t apply anymore.

The journal in which Lazzarini published his remarkable results is named Periodico di matematica per l’insegnamento secondario. From the full title, it is obvious that this was not a proper scientific journal but a magazine for school teachers. Apparently, this was missed by all the authors who wrote about it later. Lazzarini probably was a school teacher himself, as almost no other articles by him could be found.

What should have been a red flag as well is that Lazzarini only gave two decimal for the measurements of the length of the needles and the distance between the lines. Any science teacher would have noticed that with such limited accuracy giving eight decimals in the result of the calculation is unjustified. To be fair, Badger noticed this as well, but it is remarkable that he still thought it was necessary to perform further elaborate calculations to ‘prove’ that it is extremely unlikely that the experiment was really performed by Lazzarini.

Van Maanen concludes that instead of deliberate fraud it is more likely that Lazzarini intended his article to amuse his fellow teachers. A fun story that might be used as inspiration for a classroom lesson.

Two ways to prove the formula for π from the Buffon’s needle problem by Presh Palwalkar (author of the Mind Your Decisions Blog):

One thought to “The exceptional accurate experimental approximation of pi by Lazzarini was a joke, not fraud”

RT @Debunk_the_Funk I often ask the question "Why can't anti-vaxxers read?" I had to ask myself this question many times when listening to the recent viral video of Clare Craig. Since she didn't read it, I went through the FDA briefing document for her. youtube.com/watch?v=NThqP3…

RT @fakehistoryhunt There is no evidence for this story having actually happened, it may have been based on a threat a maharaja once made. The car on the photo is not a Rolls Royce. More information here; fakehistoryhunter.net/2022/06…

RT @Debunk_the_Funk I often ask the question "Why can't anti-vaxxers read?" I had to ask myself this question many times when listening to the recent viral video of Clare Craig. Since she didn't read it, I went through the FDA briefing document for her. youtube.com/watch?v=NThqP3…

RT @fakehistoryhunt There is no evidence for this story having actually happened, it may have been based on a threat a maharaja once made. The car on the photo is not a Rolls Royce. More information here; fakehistoryhunter.net/2022/06…