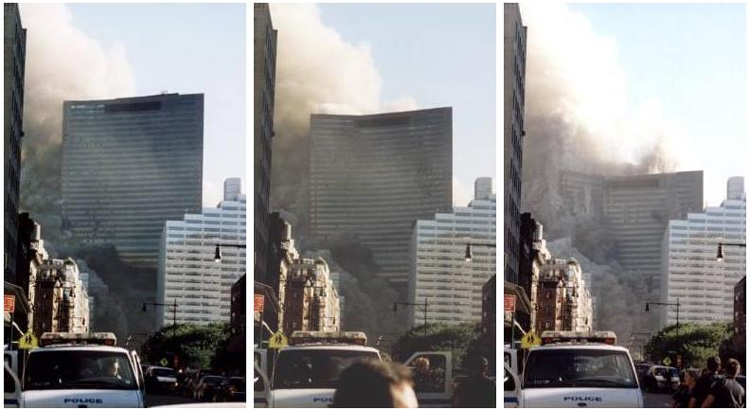 On 9/11 not only the two main towers of the World Trade Center collapsed after terrorists flew planes into the buildings. Another huge building, WTC7, came down later that day. The collapse of this building has become one of the main issues that truthers see as proof that the official story is fabricated by the US government to conceal that the buildings were in fact brought down with explosives in a controlled demolition.

Truthers dispute the official explanation, given by NIST, that the building collapsed after fires had raged uncontrolled over several floors during the day after the building was hit by debris from the North Tower. One argument that has dominated the discussion is ‘the fact’ that WTC7 came down at free fall speed. Truthers claim that this cannot be explained by the NIST models, but only by controlled demolition (even though usual controlled demolition doesn’t show free fall for several seconds either).

In their preliminary report NIST had stated that based on the visible evidence it had found that when the exterior facade came down, 18 floors descended in 5.4 seconds, implying an acceleration about 40% lower than free fall acceleration. After questions were raised they had another look and in the final report they acknowledged that for a period of 2.25 seconds (within the 5.4 seconds) there appeared to be acceleration “equivalent to the acceleration of gravity g“. But they also wrote that this was still “consistent with the results of the global collapse analysis” (for a discussion on whether that makes sense I refer the reader to Metabunk).

Let’s see how this came about from the viewpoint of David Chandler, who showed that there seems indeed to be a short period of time during which the northern facade of the building came down at an acceleration equal to the free fall acceleration (9,81 m/s2).

Occasionally this issue has come up in discussions I had with people who are quite sceptical about the official explanation for the collapse of WTC7. Although I had some doubts about the approach NIST used to calculate the acceleration, I didn’t really have a close look and limited my criticism to out that NIST didn’t show how accurate their calculation is and that the identification of the three phases seems a bit arbitrary. Let’s see what they did in more detail.

NIST explains what they did in paragraph 12.5.3 of the final report. You can download the full report or just the pages that I will be talking about.
Like Chandler, NIST picked a point from a video (a different one than Chandler used) showing the collapse, followed that point going down and measured time and height. How they did this exactly and how accurate that was done is also not entirely clear. But I’ll focus on what they did tell us.
The data points are given in the following graph:

NIST fitted a curve through these points using a formula that not really have physical meaning. They use the derivative of this curve (as an approximation of the actual speed) to identify the three stages. This is shown in the following figure:

Without much ado, NIST tells us that they see three stages by cutting this 5.4-second period (during which the fall of the North facade is visible) at 1.75s and 4s: “The slope of the velocity curve is approximately constant between about 1.75 s and 4.0 s.” Just by eyeballing the graph it seems, and the cuts seem quite arbitrary to me.

Now they assume that Stage 2 has a constant acceleration and approximate this by performing a linear regression on the velocity data points. In this way, they find an acceleration of 32.196 ft/s2 (= 9.81 m/s2) which is pretty close to the gravitational acceleration g indeed.

Those velocity data points, however, are not directly measured velocities. They are calculated by using a central difference approximation. In other words, for every two neighbouring points in Figure they took the velocity of the moment halfway as if the velocity was constant between those two points! This is a questionable approach, I think, as this loses information. You do the regression on virtual points (the start at 1.75s and the end at 4s are not even moments at which we have measured anything). Also, the errors of these data points are not independent. But of course, a linear regression is easy to perform…

Why not do a polynomial curve fitting on the actual measurements in Figure 12-76, I wondered? If we assume a constant acceleration a for a certain period, the height is given y(t)=x0+v0(t)+1/2a t2 with x0 and v0 the height and velocity at t=0. So that’s what I started to work on next.

Doing it better than NIST

If we stick to the stages NIST has identified I think it is reasonable to take the 11 data points that lie in the period from 1.6s till 4.1s because those are used to calculate the 10 velocity data points in Figure 12-77.

I used Figure 12-76 and Photoshop to read off the values of the data points. The values I found this way you can see on the right.
First I used these values to replicate the linear regression NIST did and found a slightly different value for the acceleration: 32.237 ft/s2 . This is pretty close and I think it is fair to assume that the values I read off Figure 12-76 are close enough to the real values of the data points NIST used.

Now I used these data points for a polynomial curve fitting and found as acceleration the value 31,974 ft/s2 (=9.75 m/s2), a little lower than in the approach used by NIST. I think this can be understood because in my approach stage 2 is a bit longer. But remember that we actually used the same data points. To me, my approach seems more logical.

When I plotted the found approximation over the data points I noticed that the first point seems quite a bit off the curve.

Now I did the same curve fitting exercise leaving this first point out and found an acceleration of 31,024 ft/s2 (=9.46 m/s2). And an argument can be made that this is a more reasonable fit when you look at the differences between the curves and the data points. The sum of squared residuals divided by the number of data points is for the 10-point curve about half of the 11-point curve.

Although it is true that NIST ‘admitted’ that for 2.25 seconds the exterior facade of WTC7 came down at an acceleration equal to free fall acceleration, I think it is fair to state that this was based on a questionable calculation. In my view, an acceleration of 9.46 m/s2 can be defended with arguments that are at least as good as those of NIST.
Of course, the importance of this all is rather limited as it has no consequences for the models used by NIST to get a grip on why the building collapsed.

NB In my experience discussions on posts about anything related to 9/11 to sprawl rapidly in all directions. Please stay on topic. C that discuss other issues than the calculation of the acceleration of the descent of WTC7 will probably be deleted by me.

6 thoughts to “Did WTC7 on 9/11 really descend in free fall for 2.25 seconds? A closer look at the NIST calculation.”