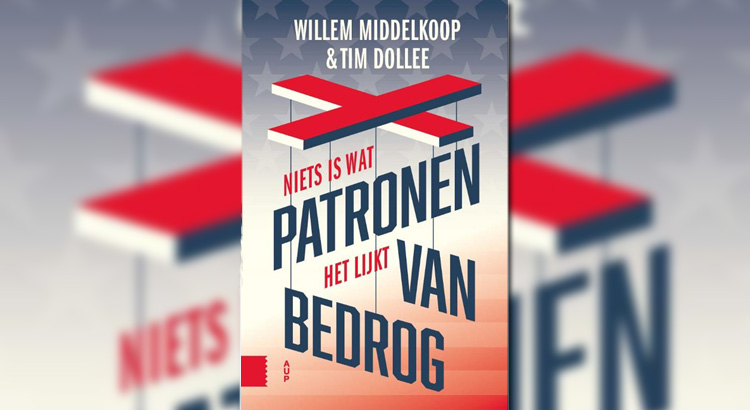 On 12 June 2018, I published a book review of Patronen van Bedrog, a book written by Willem Middelkoop and Tim Dollee. The title translates into Patterns of Deception. In this review (published on Kloptdatwel.nl) I argue that this is not a very good book, to say the least. It repeats conspiracy theories thrown up by others and doesn’t look into those critically at all. I also make a strong case that the book copies way more text from an article by Carl Bernstein than is usually accepted as a citation.

Middelkoop is not pleased with my review. He threatened on Twitter to cause some legal trouble (also hinting at my lawsuit with Santilli), was mocking me in several interviews, and in November (so five months after my review was published) I received a threatening letter from his lawyer in which he demanded that I publish a public apology and remove the review immediately. Of course, I replied to these letters in detail to explain why he doesn’t have a case.

In February he sued me anyway. Middelkoop argues that my review has caused him unquantified damages and that publishing it was an ‘unlawful act’. This is a civil case, an accusation of slander or libel would be a criminal case and probably been dismissed straightaway by the prosecutor.

Middelkoop has published on other subjects before this book, mostly on the financial system. And he was a regular guest on talk shows at the beginning of the financial crisis. Although he was known by me to be an adherent of several conspiracy theories (mostly around 9/11 and false flags) in this book he definitely comes out the closet as a conspiracy theorist.
Dollee is not very well known. I just found some translation work by him of English articles into Dutch on what I would qualify as promotion of quackery. I haven’t seen any comments by him about my review of their book.

What makes Middelkoop so angry at my review?

It seems that Middelkoop thinks that my review goes over the edge, that it is way more critical than usual for book reviews. A couple of days before my review saw the light however, another review was published by sociologist Eric C. Hendriks in NRC Handelsblad, one of the best-regarded newspapers in the Netherlands. This review was at least as critical as mine, so why didn’t he target Hendriks as this review was surely read by far more people?

Maybe Middelkoop really thinks he can scare me so much that I will remove my review, or at least that it is worth the effort of trying. And maybe because my review is far more thorough than Hendriks’ as I give many concrete examples of where the authors went wrong.

The many errors in the book range from silly mistakes (wrong references, probably copied from other sloppy authors), to unjustified accusations based on dubious sources. One of the most hilarious ones is that the authors write that the CIA has murdered Bob Marley. They took this from an article on the website of a Zimbabwean Newspaper, but any serious fact-checker would have found out in seconds that this is a hoax.

A more serious issue is that the authors used large parts of a famous article by Carl Bernstein (‘The CIA and the Media‘) in an inappropriate way. Almost 85 per cent of a chapter of six pages consists of literally translated parts of Bernstein’s article and only a few paragraphs of this have been properly laid out as citations. Of course, citing is allowed, but it should be proportional and you must take care not to suggest that you wrote the cited text yourself. (On the right you can see my comparison of the chapter in the book by Middelkoop and Dollee and the article by Bernstein; green paragraphs are correct citations, blue ones are not readily identifiable as citations).

After publishing my review I contacted the publisher, Amsterdam University Press, on this last issue. After a while, they acknowledged that it had been wrong (but denied that it was plagiarism) and they stated that it would be corrected in future prints. I am not sure whether their intended solution – just to place everything in between quote marks – is an adequate solution, however.

Also in the letters from his lawyer, Middelkoop has admitted that it was a mistake to take the silly conspiracy theory around the death of Bob Marley serious, and he announced that this will be removed from future prints of the book. At the moment I’m not aware of such a new version of the book, so I have not been able to see what else they might have changed.

But these are just two of the many issues with the book I mentioned in my review. Off all the other blunders, Middelkoop states that these are not wrong (as he gives sources for those) or that they are immaterial. He completely dodges my main argument that the fact that a source exists, doesn’t mean you can use it as if it is true. Especially when you deal with conspiracy theories, you should be aware that you have to check, double check and recheck your sources because there are so many made-up stories around. And a respectable author would also explain why he thinks one source can be trusted, and others (like the generally accepted versions of events) cannot hold up to scrutiny.

The lawsuit has just started and it might take a couple of months to come to an end. I’m not too worried about the outcome as the freedom of expression allows you to write very critically anyway, and my criticism is substantiated pretty solid.

For now, it goes too far to translate my review in full, as there is not yet an English translation of the book. So if you don’t know Dutch, you’ll probably have to use Google Translate to get a grasp of what other problems I found in the book:

Update 5 June 2019
This morning I was in a courtroom with Willem Middelkoop because of this case. The court will give judgement on – and I’m not making this up – 11 September…

Update 24 October 2019
The Court of Gelderland is understaffed. The verdict had already been postponed till 23 October, but also on this date, nothing was published. No clue how long it will take at this moment. We’ll just have to be patient.