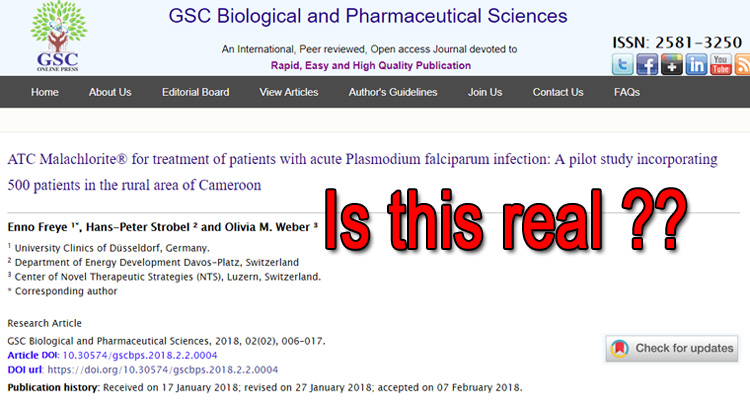 My attention was drawn to a study via Twitter by a guy named Sam Little who is involved in some dubious test with the well known and dangerous quack product MMS [23/5/2019 see update below]. He recently performed a test in Uganda which is very similar to the test that was performed in Uganda several years ago on which I have written a couple of posts (see Fake and Unethical Trial: Video Claims Miracle Mineral Solution Cures Malaria and follow-ups).

NB the study has been retracted! See the updates below this post.

The recent test got some attention in an article in The Guardian (‘Church’ to offer ‘miracle cure’ despite FDA warnings against drinking bleach) and it looks that Little feels the need to justify his unethical test by pointing out that a similar drug was tested by real scientists with good results:

I had a look at this study and it looks extremely fishy to me. The drug they tested is a compound of the well know antimalarial drug artimisin and some chemicals which will produce ClO2, chlorine dioxide. This is the reason the MMS quacks love this study as this is the same gas that according to them is supposed to heal you from all kind of diseases. Of course, differences are obvious, the Malachlorite is taken as a sublingual tablet and it contains an actual antimalarial drug as well.

But there are many issues with this study which I consider as huge red flags and they make me wonder whether this pilot study is for real. I will just briefly summarise these issues:

I will follow up on this story when I find out more.

Update 25 April 2019
I contacted the Heinrich Heine Universität about Prof. dr. Enno Frye. On his ResearchGate profile, he mentions that he is an adjunct professor at the Institute for Pharmaceutical Technology and Biopharmaceutics. But when I looked at the website of the institute I couldn’t find his name. Asked about this, the institute replied that he had never worked there and that they wish to distance themselves clearly from his works!
A little later I contacted the Faculty of Medicine to find out whether he might be affiliated in another way. The reply was quite intriguing:

The Medical Faculty of the Heinrich-Heine-University Düsseldorf can officially inform you, that the faculty has informed Dr. Freye at the beginning of February 2019, that he is no longer allowed to bear the title of „Apl-Professor“ of the faculty. The faculty decided to revoke his title, as „he severely damaged the respectability and trust this title required“. The decision is legally based on theVerwaltungsverfahrensgesetz NRW (§ 49 Abs. 2).

Update 23 May 2019
According to Business Insider Sam Little has been arrested. Authorities in Uganda started to act after The Guardian published the story about the US pastor Little was cooperating with: US pastor runs network giving 50,000 Ugandans bleach-based ‘miracle cure’

Update 5 August 2019
I did not really expect it to happen, but the journal has retracted the article! From the retraction note:

Notice of formal retraction of article by Dr. Enno Freye and his team members. This article has been retracted at the request of The Editors as a result of
(1) The Editors were recently alerted by a reader that the data reported in this manuscript is fake and no such study has been actually conducted by the authors, upon close inspection, reflect a suspicious activity suggesting that the data reported was manipulated or actually fabricated and
(2) The inability of Dr. Enno Freye and his team members to provide additional required data and reports to attest to the integrity of the study and/or its data under question on request of Editor in chief.
The Editors, after consultation with the Publisher and Editorial Board of the Journal, decided to retract the paper.

[1] Yeah, I know it looks odd to cite an article by the author’s first names, but that’s just what is the preferred way of citing according to the article itself under ‘How to cite this article’. You may see this as another red flag.