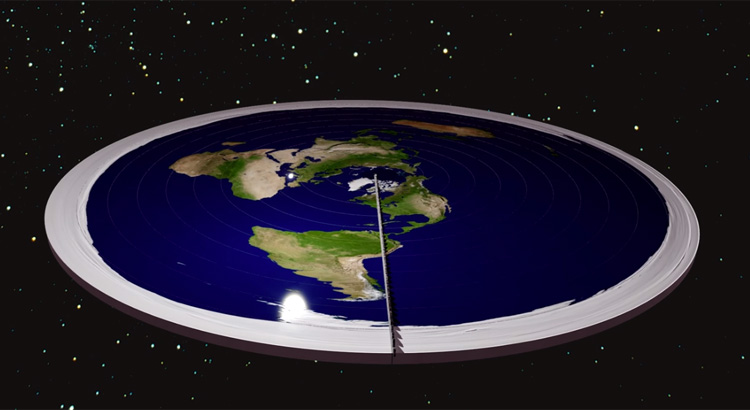 Dutch newspaper Trouw set out a poll, in collaboration with Kieskompas, to investigate the belief in several conspiracy theories. One of the results they reported is that ‘almost one per cent of the Dutch, 0.9 per cent to be exact, think that the Earth is not round, but flat.’ This would amount to about 150.000 people, which seems to be on the high side.

I asked Kieskompas what the exact question was they had used in the poll. I suspected that it wasn’t a neutral question about the most likely shape of the Earth. My suspicion proved to be right as the panellists were asked to indicate on a five-point scale how likely they would judge the following statement (my translation):

NASA and other organisations do everything to obscure that the Earth is not a globe but a flat disk.

In my opinion, this question is more about the belief in a conspiracy than asking about someone’s spatial representation of the world. The formulation is understandable considering the goal Trouw had for the poll, i.e. find out how much support there is for conspiracy theories. But even then I find the question a bit unclear, I would have preferred something like:” NASA and other organisations do everything to obscure that the Earth is, in fact, a flat disk and not a globe as they tell us.”

If you are just interested in peoples opinion about the shape of the Earth, you shouldn’t frame the question as if the idea that the Earth is flat automatically implies the belief that several large organisations are involved in a conspiracy. People who believe the Earth is flat might not have given that a thought. You shouldn’t test their idea in the question and better ask them to choose from multiple options like:

According to you which of the following descriptions best fits the shape of the world we live on, ignoring the differences in heigth caused by mountains and sees?
a) a globe
b) a somewhat flattened globe
c) a flat disc
d) a possible irregular shape wich has a flat surface upon we live
e) a completely different shape

People answering ‘a’ or ‘b’ I would count as globalists, those answering ‘c’ or ‘d’ as flat-earthers. I think that by asking a question like this you would get a far lower estimate for the number of Dutch people who believe the Earth is flat.
It is imaginable that people give apparently contradicting answers to both questions. Someone who thinks the Earth is flat doesn’t necessarily have to suspect that NASA is a sneaky organisation trying to delude us. On the other hand, a person receptive for conspiracy theories might find it likely that NASA is such an organisation and base his judgement on the proposition mainly on that feeling, while at the same time regarding the globe as the best model for the Earth. One of the most striking features of conspiracy thinkers is their capability to hold onto thoughts that are logically incompatible.

A previous article in Trouw based on the same survey mentions that 1,6 per cent believes that ‘the real rulers on Earth are lizard-like creatures from another planet.’ This is an even weirder idea. You might get the impression that some panellists didn’t take this survey very serious. But Kieskompas told me that they have several ways to check whether someone is answering in a playful way and that this doesn’t seem to have had an effect on this survey.

The same researchers had set out a similar survey in 2013, but that one didn’t have a question regarding flat earth. A question on UFO’s was part in both surveys. The proposition was: ‘All over the world there are UFO-landings on a regular base.’ This was found likely or very likely by 11.9 per cent in 2013, but this year by ‘only’ 6.9 per cent. A remarkable decline for which I don’t have an explanation at hand.

In the United States, the belief in a flat earth was polled by YouGov. The result caused somewhat of a stir as some media thought it interesting to misrepresent the result within the youngest subgroup as “a third of millennials believe the Earth is flat”. Also here the question was formulated in a questionable way because the right answer is missing: most flat earth models are based on a round disc.

Addendum 9 October 2019
Glenn Branch of the National Center for Science Education pointed me to three interesting blogs he wrote for Scientific American together with Craig. A. Foster.

One thought to “Poll shows 0.9 per cent of Dutch people believe the Earth is flat”