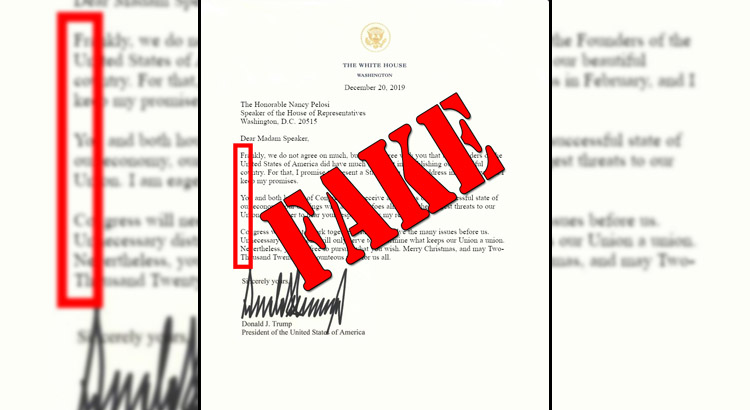 This acrostic letter is doing the rounds on the socials. Of course, it is a fake; no such letter was sent by the President on 20 December 2019 as you can check out easily. This letter probably originated from 4chan.

I noticed that the signature was taken from a real letter by the US President, one he sent to Kim Jong Un on 24 May 2018. By overlaying the signatures in a image editing program like Photoshop you can see for yourself that they match perfectly.

It could be that this fake was inspired by the letter professor Daniel Kammen sent to resign as the State Department’s science envoy. The first letters of the paragraphs in his letter spelled the word ‘IMPEACH’.

But there are older examples. As governor of California, Arnold Schwarzenegger once vetoed a bill with a statement in which the first letters of the lines spelled out ‘Fuck you’.

But because it is clear that the Trump letter features a copied signature, we can be sure that it is a fake. A real letter Trump sent to Pelosi on 17 December 2019 regarding the impeachment is far less funny and actually more bizarre.