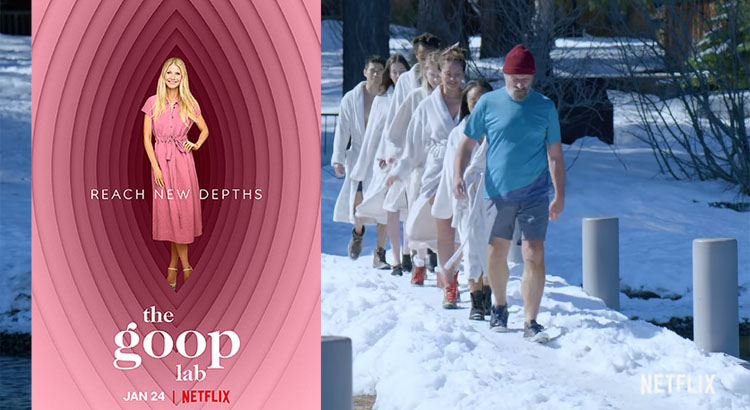 Even before the goop lab is available on Netflix the series has got a lot of very bad reviews. This was to be expected as Gwyneth Paltrow’s Goop has been promoting all kinds of quackery and pseudoscience in the past and has been criticised heavily for it. So no wonder that many are critical of Netflix for letting Paltrow use its platform to potentially reach many millions of their subscribers. Some interesting and detailed reviews were published on STATnews and ArsTechnica even before the coming release on 24 January.

Episode two of the series, titled “The Cold Comfort”, focusses on the Wim Hof Method, about which I have written on this website before (see Wim Hof’s Cold Trickery). Apparently there are not that many critical articles on Hof’s method, so my article dating back to 2016 (and largely based on a Dutch article in Skepter from 2015) is still found by many looking around online for a review of the claims that hang around the Iceman’s methods. And of course now with the goop lab coming and it is known that it features the Wim Hof Method visitor numbers are on the rise again.

Reading the articles by the reviewers who had the opportunity to watch the series beforehand, I don’t think that we will learn anything new about the Wim Hof Method that hasn’t already been discussed. However, since his book Koud Kunstje came out in 2015 (in The Netherlands) some more research has been done on the Wim Hof Method. So my views from 2016 might deserve an update. In this post, I will have a brief look at three scientific publications to see whether those bring any new insights.

The role of outcome expectancies (2015)

This study was done aside from the main study that was published in PNAS about which I wrote in my previous post on the WHM. It shows a relation between the level of optimism the test subjects have in general and a specific response of their immune system during the endotoxemia experiment. A higher degree of optimism was associated with higher plasma epinephrine levels.
They also asked the subjects (12) beforehand about their expectations of the effects of the training and found that the more positive they were about those, the lower their flu-like symptoms were during the experiment.
All in all results that are in line with other research and it shows that placebo effects most likely play an important role.
Unfortunately, similar tests in the control group (that endured the experiment without the training in the WHM) are not reported upon in this article. So it still leaves something to guess what the influence of the training exactly was, as we cannot fully separate the expectations about the effects from the training from the idea that they were taking part in the experiment itself.

This is about experiments done on Wim Hof himself. The researchers put him a wetsuit that they were able to fill with water of different temperatures. Wearing this suit, Hof was placed in an fMRI-scanner so that the researchers could see what was happening to his brain while being exposed to different temperatures and either using his methods to cope with the cold or ‘passively’ endure it as control.

In an article on the Conversation Otto Muzik and Vaibhav Diwadkar, two of the authors of the study, explain what they found and why this is interesting:

Being severely cold will interfere with rational thinking, a condition that in hypothermia is catastrophic. But one cannot simply imagine a sunny beach to wash away the unpleasantness associated with feeling very cold. In this instance, the “physiological” system outweighs the “psychological” system.

This asymmetry of causal effects in brain networks has been taken for granted. But could strategies that target innate physiological mechanisms induce top-down psychological control? Emerging research suggests that techniques that combine physiologic stressors with focused meditation may “break” this asymmetry, allowing the psychological to modulate the physiological. That’s what we observed in recent studies we performed on the “Iceman” Wim Hof.

While Hof managed to keep his skin temperature unchanged they could see that regions of his brain that are important for regulating pain, were more activated than in controls, which suggests that he is able to deal with the cold by modulating pain pathways. They also found that Hof had an increased glucose consumption in the muscles between his ribs, which leads to improved heat exchange between lung tissue and blood. That seems lower the risk of frostbite as it keeps the blood streaming better through the extremities.

Somewhat surprising is that they didn’t find a significant activation of brown adipose tissue in Hof so that his higher amount of brown fat might play less a role than previous research suggested.

Wim Hof’s company released the sleek video below just a couple of days after the study was published. Although it gives a reasonably accurate description of what the idea is behind the research done, it does forget to mention that was a small (n=24) proof-of-concept trial, which was primarily focussed on finding out whether it is safe to let patients practise the method. Also, it forgets to mention that although they found a decrease of C- reactive protein (CRP) in the WHM group – it went down from 10.2 to 6 mg/l – this change was not significant. The video speaks of a ‘powerful’ effect and ‘successfully lowered’ and that can be considered misleading.

This research also does not validate the WHM as an effective tool for whatever condition, contrary to what the company claims in the description below the video.

The 2014 Radboud study validated the Wim Hof Method as an effective tool in bringing down acute inflammation. Now, a new study has shown that the WHM can also effectively combat chronic inflammation.

However, the way they look at this statistically does not really convince me. For example, the report that ESR ( erythrocyte sedimentation rate) went down from 16 [9–26.5] at baseline to 9 [5–23] mm/hr which is apparently significant, p = 0.040. In the control group, they found no effect (it went from 14 [8.3–27.3] at baseline to 16 [5–37] m/hr, p = 0.406). The comparison here is done with median and interquartile range, and I’m not quite sure if that makes sense. But the suggestion that finding a significant change in the intervention group and not finding a significant change in the control group means that the intervention is significantly better than the control condition is not correct, you need to do another calculation for that.

But I’m not going to break my head over this for the moment, if only for the reason that the number of subjects in this study was so low.

According to the Wim Hof website, more research is in the pipeline. A new article of the researchers from Radboud University that published the PNAS article in 2014, will probably see the light this year according to Matthijs Kox in a recent article in de Volkskrant.

Conclusion: not really that much news about the Wim Hof Method since 2015. The method still looks rather safe and there are some interesting effects, but whether these are more than of scientific interest and might eventually be effectively used for treatment remains to be seen.
Also not changed is the way the company of Wim Hof, Innerfire BV, exaggerates the importance of the scientific findings in its outings. In the past few years I have also received messages from several people that WHM-instructors (so not Wim Hof himself) make far-fetching health claims, which lack any scientific backing, so let’s keep an eye on this.