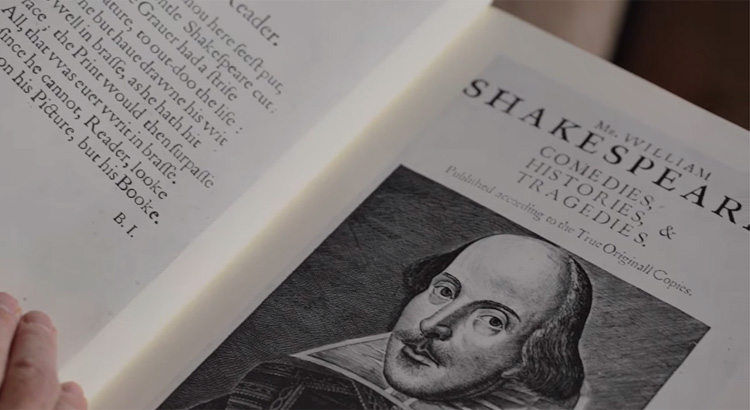 The general public will know professor Klaas van Egmond mainly as someone who plays a pioneering role in the sustainability debate in the Netherlands. He was a director at the National Institute for Public Health and the Environment (RIVM) and later became University professor Environmental sciences and Sustainability at Utrecht University.

Skeptics, however, also know about his involvement in esoterical stuff like crop circles, pseudohistory and mediums. Coincidentally I stumbled upon this interview with him and I think we can add another chapter to Van Egmond’s remarkable hobbies. Look for yourself first, then I will comment on it.

That William Shakespeare is not the author of the works attributed to him is not a new theory, but the idea is hardly taken seriously by scientists. After all, the evidence that Shakespeare is indeed the author is overwhelming. The poem that Van Egmond analyses is seen by many as proof of this because Jonson writes in it that he thinks it resembles the man he knew.

But let’s have a look at Van Egmond’s puzzle. In a document on his website [‘Shakespeare’ as metaphor; squaring the circle], he has written it all down a bit more extensively and it also appears in his book Homo Universalis – Moreel kompas voor een nieuwe Europese renaissance, published last year.

The engraving Martin Droeshout made for the First Folio does indeed look a bit strange to us and has led to conspiracy theories. It would contain a hidden message. Art historians, however, do not have such a problem with it and point to other portraits that contain similar ‘errors’. The idea that the portrait is so bad that the compilers of the First Folio would only have accepted it if they had explicitly instructed the artist to put those hidden messages in it, can actually be thrown right into the wastebasket.

Below, Van Egmond illustrates once more how this engraving would contain two references to the number π, the ratio between the circumference of a circle and its diameter (or τ/2 for connaisseurs). 14 buttons below the division formed by the edge of the collar, and a vague 3 that you can see in the contours of the face: 3.14. Utterly convincing, isn’t it?

Then to Ben Jonson‘s poem. According to Van Egmond, it would be constructed like a building that refers to Vitruvius, circles and squares, and the number π. To start with the latter: Van Egmond suggests that Jonson, by stating that there would be too little brass to do ‘This Figure’ justice, means that the decimal development of π is infinite. Now that’s actually the case for every number. Only in the case of rational numbers, numbers that you can write as a fraction, we can cut off the development without losing precision, because at a certain point a repetition occurs. With irrational numbers there is no repetition and the development in decimals is ‘arbitrary’.

The fact that π is an irrational number was only proven by Lambert in 1761 (although it was previously suspected by Euler), more than a century after the publication of the First Folio. At the time of its publication, the best approximation of π was 35 decimals, calculated by Ludolph van Ceulen. You can see an engraving of him on the right, where his head also seems to float above his body! There must be a code hidden in it, I count four buttons… But it was not known in 1623 whether π could be written as a fraction after all, and the suggestion that Jonson already knew that it couldn’t is pure imagination.

Then the total number of words in the indented lines and the non-indented lines of the poem, 34 each, would point to a square of 34 by 34. The number 34 apparently figures in other works of Jonson as well and might have a special meaning, I didn’ check this out. However, if Van Egmond goes further by pointing out that the perimeter of a 34 by 34 square, 136, implicitly refers to the known approximation 22/7 for π, he has lost me for a moment. OK, a circle with circumference 136 has a radius of 21.6, which rounds off to 22, but it gives a less good approximation of π than if you started with a square of 35 by 35. By the way, the ‘7’ from fraction 22/7 can be found in the number of words in the text that start with a capital letter but are not at the beginning of a line. Sure.

It is also remarkable that Van Egmond interprets this as a reference to the well-known problem of the squaring of the circle. This is always defined as finding a square with the same area as a given circle, not in terms of circumferences.

Finally, Van Egmond sees indications that there is a code in Caesar cipher in the poem. The ‘To’ in the line above the poem should be read as ‘two’ which means a shift of two letters in the alphabet, which apparently should only be applied to the next word. That the ‘1’ of ’10’ should be added to the ’21’ that comes from ‘t’, and the ‘o’ should then be seen as a separator between nominator 22 and denominator 7, is of course perfectly clear. Also that this symbolism is present in every text that starts with ‘To the Reader’…

In a vertical direction, Van Egmond also discovers a ‘2πr’. For that one, you have to look at the first letters of the non-indented lines: ‘T-W-O’, another two. Of course, this must refer to a shift in the next non-indented lines, but now we should not shift letters in the alphabet, but look for the next word that starts with a capital letter! You will find the ‘P’ of ‘Print’ and the ‘R’ of ‘Reader’. But wait a minute, that’s only a shift of 1, right? Who cares about such trivialities! Do you have a better explanation for those words that inexplicably got a capital letter in the middle of a sentence? Look at the result: ‘T-W-O-P-R’, clearly again ‘2πr’, the circumference of the circle!

Fortunately, Van Egmond knows that the letter π only came into use from 1706 onwards as a symbol for the relationship between the circumference of the circle and its diameter (by William Jones). But according to him, that is not a problem, because the symbol has been used before by William Oughtred. However, that was in 1647 and he used it as a symbol for the circumference, so actually as a result of ‘2πr’.

Van Egmond sees the outcome of his puzzle as proof that ‘squaring the circle’ is the central theme in Shakespeare’s work, conceived as an ideal of Vitruvius with a touch of Rosicrucians. And then, of course, Shakespeare is not the real author, but rather a ‘symbolic representative of the Rosicrucian movement’. I’d rather see the whole exercise as further evidence of something else…

It doesn’t really play a role in Van Egmond’s argumentation, but he also gives the following picture. He sticks the lengths of the square and the radius of the circle that he sees in Jonson’s poem, on the well-known drawing by Leonardo Da Vinci (who does play an important role in Van Egmond’s book). But if you just measure it yourself, you quickly find out that the radius of this circle is not 22 at all, but about 20.9. Da Vinci’s drawing also has nothing to do with the mathematical problem of the squaring of the circle, the circle here has a considerably larger area than the square.

Adapted from the Dutch original on Kloptdatwel.nl