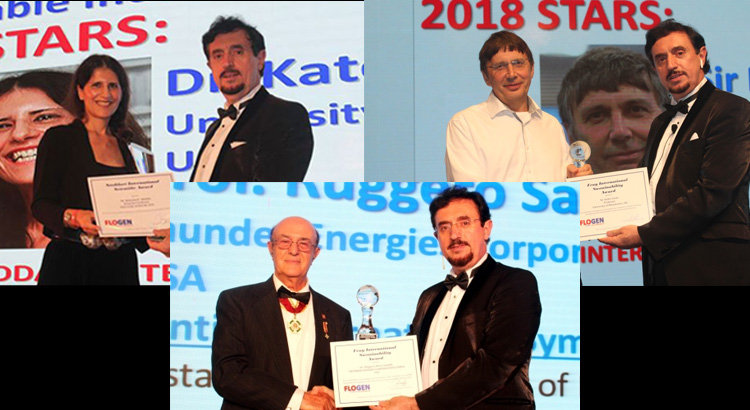 The European Anti-Fraud Office (OLAF) announced on 5 May 2020 that they had discovered “a complex fraud involving a Greek scientist and her network of international researchers”. The scientist got an ERC grant of €1.1 million that was intended for paying some 40 scientists worldwide that participated in the project. OLAF found out however, that the payments to those scientists were channelled via bank accounts that had the project leader as co-beneficiary. Another interesting point was mentioned: the scientist’s father works at the same university.

With so many details it is not that hard to find out who this “promising young scientist”must be. German independent science journalist Leonid Schneider shared his conclusion on Twitter:

The photo shows Katerina Aifantis with Canadian Florian Kongoli, the organiser of the yearly SIPS conferences organised by his FLOGEN organisation. You’ll probably never heard of Kongoli, but I’ve encountered him before. I was even invited to the 2017 edition of SIPS.

In my capacity as the President of the Organizing Committee of the entire SIPS 2017, I am inviting you to participate and present an Invited Lecture at 2nd Intl. Symp. on Sustainable Mathematics Applications. You are invited to submit abstract(s) at the Symposium and/or participate in the discussions at the Round Table

An honourable invitation to speak at a conference where at least three Nobel Laureates will be present! But a somewhat surprising invitation as well, because I’m not a publishing scientist nor affiliated to any research institution. I did however immediately understood why Kongoli had my email address in his database.

In 2016 I wrote a short post on an invention (an antimatter-light telescope) by fringe scientist Ruggero Santilli and got sued for that. Only about one and a half year later the matter was settled. During his active ‘scientific’ career (which seems have come to an end recently) Santilli has regularly infiltrated regular scientific congresses and symposia. He somehow managed (paid?) to have special workshops or sub-symposia dedicated to him being arranged where he and his followers could share their ridiculous theories.

At this occasion, Florian Kongoli also rewarded Santilli with the Fray International Sustainability Award. An award that Kongoli seems to give to all his famous speakers (look at the list of awarded scientists, that includes Nobel laureates, like Fraser Stoddart and Andre Geim). Maybe Santilli was such a good customer that he got one of those ugly awards as a free bonus.

It seems that Santilli was free to do with ‘his’ symposium as he pleased. He himself handed out some fine scientific awards to his loyal followers, amongst whom we find: Stein Erik Johansen, an anthropologist from NTNU, Trondheim, Norway, and Erik Trell, a medical doctor turned pseudomathematician. from Sweden. These two fellows feature in a crazy story on Fermat’s Last Theorem.
Johansen doesn’t seem to have published within is own field since the early 2000s but somehow managed to get promoted to full professor just before retiring at the age of 65. I suspect that a deal was made, the professorship in exchange for early retirement (in Norway it is common to stay longer in academics, till 70 or even 72 years).

When Kongoli was sending out invitations for the Santilli symposium in 2016 he got an angry reply from a Stephan Moskaliuk, who used to be on friendly terms with Santilli but had got fed up with his crazy (antisemitic) ramblings under several aliases. This email of Moskaliuk was addressed to numerous (former) allies of Santilli, and … me. So that’s how my email came known to Kongoli, who must have thought that I was interested in Santilli’s work and a logical invitee for the next edition of the symposium, in 2017, in Cancun, Mexico.

Kongoli presents himself as a consultant in technology development operating from his company FLOGEN technologies Inc. The SIPS conferences are organised by FLOGEN STAR OUTREACH, “a not-for-profit, non-political and all-inclusive science organization that takes no sides in political, scientific or technological debates” and superficially it looks like these conferences are a not Kongoli’s main activity. But his private enterprise does not show much activity at all, Kongoli only seems busy with organising these SIPS conferences.

It looks Kongoli has found a nice business model. He manages to get some Nobel laureates to accept an invitation to the conferences – which are always in nice luxury venues – and then uses their status to lure in academics and some business people to pay for participation. For the academics, he has some extra bait in the form of a promise that your contribution will be peer-reviewed and published in a scientific journal (which seems to mean that articles end up on expensive CD-ROMs that no one will likely buy).

If you are a really well-known Nobelist and have shown to be cooperative, Kongoli might even name a new award after you. He has for instance already instated the Geim International Innovation Award and the Stoddart International Scientific Award.

Now we return to the people who this post started with: Katerina Aifantis and her father Elias Aifantis. Elias received the Fray Award in 2015, so he is now ‘colleagues’ with Geim, Stoddart and Santilli. On FLOGEN’s YouTube channel you can find a brief ‘thank you’ talk by Katerina in 2017 (she is mentioned as one of the plenary speakers at the conference). She is really enthusiastic about Kongoli’s setup and sums it up pretty accurate (2:50):

What I really enjoy about the SIPS conferences is that they bring scientists from every discipline together. And we always have plenary speakers that are Nobel Prize winners. […] It is different from other conferences, because scientifically we have a wonderful and broad range of topics, but we are also given time to have more round table discussions and activities we can all participate in, many nice conference dinner, many nice music events.

If somebody is praising your business model that much, the least you can do is give her an award as well. And so it happened that Katerina got the Stoddart Award in 2019. Katerina and her father are mentioned as members of the international committees that will help organise SIPS 2020.

Update: Leonid Schneider has written about the “promising young scientist” on his blog For Better Science:

The Aifantises were even more at home at the SIPS conferences than I thought at first look. Katerina is mentioned as member of the ‘international committees’ for each consecutive year since 2014. And both are mentioned as editors (together with Kongoli) for several of the CD-ROMs with articles. When Elias got the Fray Award in 2015 there was a symposium in his name (pdf). Of course Katerina was one of the participants, but also was Jeff de Hosson, her promotor at the University of Groningen in 2005.

Another coincidence, in 2005 Ruggero Santilli was one of VIP speakers giving a plenary talk. FInally it is worth an mention that another participants of the Aifaintis symposium,  Svetlin Georgiev, helped Santilli to a workshop dedicated to him at a congress in La Rochelle, France, in 2016.
There Santilli was awarded with the ‘Technical Achievement Award’, which he himself made up ( see More Santilli Shenanigans).