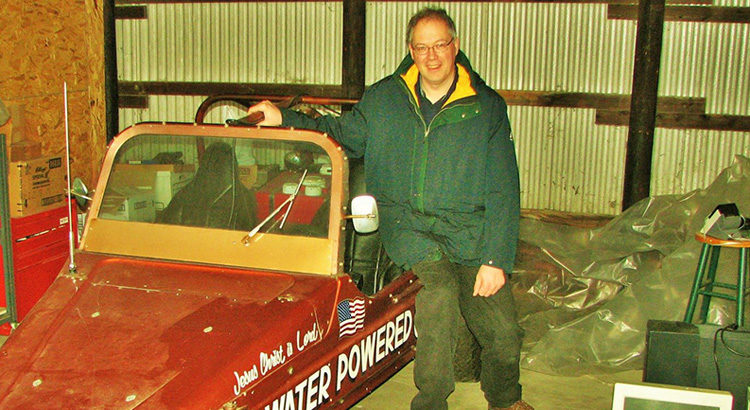 On 20 March 1998 Stanley Meyer died. The inventor of a car that allegedly could run on just ordinary tap water collapsed during a diner with his twin brother and a two Belgian investors. After taking a sip of cranberry juice he seemed to have trouble with his head, ran out the door and dropped on the ground in the parking lot. Before passing out he was just able to tell his brother Stephen: “They poisoned me.”

While the cause of death (the coroner ruled that Meyer, who had high blood pressure, died of a cerebral aneurysm) almost certainly excludes poisoning, the conspiracy theory that Meyer was murdered is widespread on the internet. In some articles, the Belgian investors are identified as Philippe Vandemoortele and Marc Vancraeyenest. A journalist for the Columbus Dispatch tried to contact them in 2007 but failed.

I had encountered the names of these two men before in another dossier. They were behind the company Letec, which developed the Xentix, a device which apparently combined light therapy and magnetism for healing purposes.
Vandemoortele belongs to a very rich Flemish industrial family. He had developed the Alpro soya drink which became a worldwide known brand. (More background in this article, Dutch only) In 1995 he left the family business, probably with enough money to invest in possibly interesting opportunities.

The fact that he had invested in something like the Xentix, which to me is a clear example of pseudoscience, left the image of a man who was willing to take a long shot and risk losing some money investing in technologies that seem highly improbable to conventional science. That he had been interested in investing in Meyer’s invention therefore did not seem improbable to me. But I also failed to find more about his involvement and Vandemoortele proved to be not easily contacted.

Writing an article for Dutch Skeptics magazine Skepter on water-fueled cars, I thought I should at least try again to contact the Belgians to hear their version of the events. None of the leads I followed seemed to work out, however. Emails and phone calls to companies in which they seemed to have been involved remained unanswered.

Then in July this year, Vandemoortele replied to one of my emails. And fortunately, he was willing to share his memories about what happened in 1998. Here are his words in answer to questions I had send him:

I met Stan at the beginning of 1995 and found his project interesting for its possible contribution to mankind. We became friends and I supported him financially until his death.

During those 3 years, I saw Stan regularly. He was extremely suspicious, and I don’t know more about his technology than anyone else, i.e. his publications. So I had to have a lot of faith, but I couldn’t see anything except his official demos. I am convinced that his project was real, not fake. My feeling was that his discovery was a kind of technical coincidence, he had trouble making it real industrial.

Stan’s technology obviously disturbed a lot of established values, and Stan had become very paranoid, which didn’t make his research any easier. Only his twin brother, Steve worked with him in the last year. Otherwise, I didn’t see anyone there, apart from the secretary of his church community.

I had bought the land in Grove City for him, he wanted to have a place to build a research centre. The intention was to officially inaugurate this on Saturday 21 March 1998. Because of this, I organised a weekend visit as often, arrival Friday 20, and departure Sunday 22. I had taken Marc Vancraeyenest with me, at Stan’s request, to improve our communication via computers. Marc Vancraeyenest had nothing to do with the project.

The evening of my arrival, Friday, we went to the restaurant with his twin brother Steve and my friend. A few minutes after we were seated, Stan has a brain problem, an ambulance comes and he leaves with his brother. The next Saturday, his brother told me that he had died. His death was a great shock, especially the loss of a friend and also a valuable project. The next day, Sunday, I flew back with the booked flight. There was nothing more I could do, I only knew Stan, and his brother took care of everything.

Immediately after his death, many heirs appeared like magic. Including his wife whom I never saw or heard of before. Especially his brother Steve wanted to continue working and asked if I wanted to finance further. I refused, I felt too much greediness, secrecy and lack of knowledge and ideal. For me, it was over. Stan was my friend and nobody else.

I have some doubts about whether his death happened by chance, but I know nothing more than anyone else. What is certain is that I didn’t kill him, he was my friend and I even paid his bills the week before. Why someone made a fake video about me and my friend as Stan’s killer remains a mystery to me. Maybe someone who wanted to draw the attention away from himself?

His work and his death have aroused a lot of interest, about the miracle invention and about conspiracy theories. Now more than 20 years have passed and no one has been able to imitate his technology and his heirs have not become rich.”

Taking into consideration the background of Vandemoortele, this story appears trustworthy to me.

Who started the rumours?

So where do the rumours of foul play come from? The idea starts with the testimony of Stanley’s brother Stephen. He was the only witness to his last words. According to Vandemoortele he also tried to prolong his financial support for the project. Would you ask that from the men you hold responsible for the murder of your brother?

Another remarkable thing: in a Youtube-video, somebody shared the coroner’s report, which mentions that the two Belgians were from NATO!? Who made this up? Was it something Stanley told his brother to give the financial support he received out of Belgium (the NATO headquarters are in Brussels) a higher, more official status? Questions remain but given the person Stanley Meyer was, this should not come as a surprise.

One thought to “Stanley Meyer, the inventor of the water-powered car, was not killed by Belgian investors”