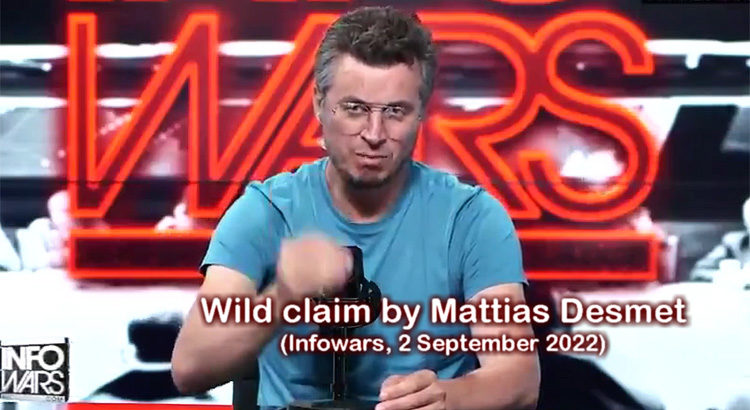 Update 5 September 2022: Desmet apologises for the wrong impression created by his interview with Alex Jones. See update at the bottom of this post.

On his book tour in the United States, Mattias Desmet, professor of clinical psychology at the University of Ghent in Belgium, also visited the Infowars show of conspiracy theorist Alex Jones. Apart from losing any credibility he may have left, he also made a remarkable claim:

For once we might have to agree with Alex Jones here, this claim is truly unbelievable. Although hypnosis has been used in addition to local anaesthesia for minor heart surgery (where the heart is approached via an artery), there are to my knowledge no credible reports of it being used for open-heart surgery without anaesthesia.

Perhaps Desmet misinterpreted stories like these: Hypnosis used in France for heart operation and Hypnotherapy isn’t magic, but it helps some patients cope with surgery and recovery. But as he also claims that he himself witnessed such operations with his own eyes in Belgian hospitals, he is probably making this story up entirely. Or perhaps somebody has implanted these as false memories in his mind during hypnosis …

Just the day before Desmet was on Jones’s show an interview with him by Tucker Carlson on Fox Nation was published. In this interview, he said almost the same about these operations, but there are some differences:

Here Desmet somehow ‘forgot’ that he was an eyewitness to these procedures (or did he make that up, especially for Jones?). But more important is that he mentions the name of the surgeon who performs these operations under hypnosis: Marie-Elisabeth Faymonville.

Faymonville is a doctor working at Liège University Hospital and is indeed known for using hypnosis. However, in this kind of procedure, local anaesthesia is used and the patients get painkillers. Also, open-heart surgery is not on the menu as she told the Belgian newspaper De Morgen:

Currently, hypnosis is mainly used for aesthetic procedures, groin ruptures, hemorrhoid removal, childbirth, removal of uteruses, breast cancer operations and dental surgery. Faymonville: “For major procedures such as open-heart surgery, it is not possible, because with such procedures you have to stop the heart.”

I think it is safe to conclude that Desmet has pimped up this story, and even included himself as an eyewitness to operations that cannot be performed using this technique.

“I am sorry for the inconvenience caused …”

On his Facebook page, Desmet has posted a rather long statement in which he apologizes for the wrong impression he gave about his involvement as an eyewitness of an open-heart operation under hypnosis. He writes that he was confused when Jones asked him to confirm. Jones: “You’re saying you’ve seen people hypnotized, they can have open-heart surgery with no anaesthesia?” To which he answered: “Absolutely.”

Desmet explains that about 15 years ago he did a lot of research on the subject, and contacted hypnotherapists, dentists, and doctors; he even saw at vets’ practices that hypnosis works. In addition, he has watched a series of documentaries – including one about Professor Faymonville.

He also mentions a blog post that reports on Turkish surgeons performing open-heart surgery under hypnosis but also writes that he has yet been unable to get to the academic article in which this operation is described from the United States where he currently is. It most likely is this article: The Beneficial Effect of Hypnosis in Elective Cardiac Surgery: A Preliminary Study. A quick look suffices to see that in these operations hypnosis was not used instead of the usual anaesthesia, but only performed prior to surgery as an addition to the normal procedure to see whether it could have a positive effect on presurgical anxiety and better pain control post-operation.

In addition, Desmet gives a bunch of links to other stories about (non-open-heart) operations where hypnosis has been used but fails to mention that in these cases local anaesthesia was involved.

Desmet has tried to spin the narrative about his mistake even further. He now tells his audience that immediately after the Alex Jones show he wrote the Facebook post in which he admitted not having seen the operation. In fact, this post was published three days after the interview with Jones went online and two days after questions were raised on social media. Also I myself sent him an e-mail in which I asked in which hospital he had seen it, just after I published the first version of this blog. Only two days later and probably because at that time he was also receiving emails from journalists and he could expect to see some articles published in the mainstream media, he wrote up his Facebook post (in which he makes things worse actually). It is hard not to see this as pre-emptive damage control.

To make matters worse: I found out that in an interview, in October 2020 with Dutch alternative news channel De Nieuwe Wereld, Desmet tells that he was informed by someone who read an article of Desmet in which he had also mentioned these open-heart operations under hypnosis, that he must be wrong. Desmet then tells he had not yet been able to verify his sources, but apparently saw no issue in continuing to tell the story for the next two years in almost every interview.